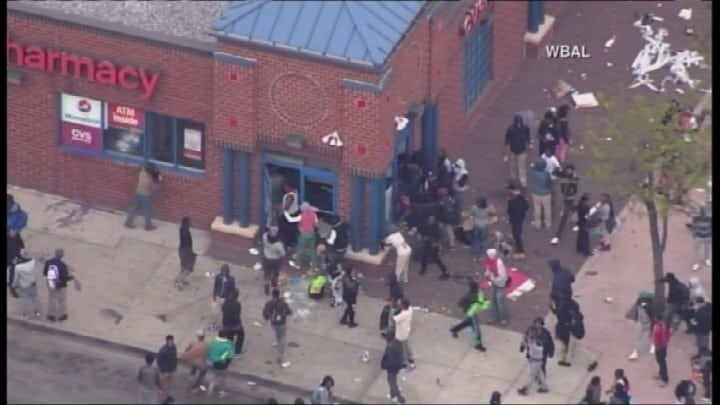 In the face of the second evening of Freddie Gray protests and rioting in the city of Baltimore, individuals who have taken to looting stores, cars and residencies have been described as thugs and nothing more than criminals.

‘When they burn down a building they’re committing arson.’

Obama’s comments were similarly played out by other public voices who also regaled those taking the streets.

Said Baltimore Mayor Stephanie Rawlings-Blake on Monday night during a press conference addressing the uprising and violence in the community:

Adding: ‘…too many people have spent generations building up this city for it to be destroyed by thugs who in a very senseless way are trying to tear down what so many have fought for.’

Whilst common sense may dictate that stealing and setting property on fire is a crime and technically illegal, one ought to bear in mind that such action isn’t being committed for the sake of criminality but rather for the sake of political countenance.

A point hardly being addressed and purposefully ignored by most (tone deaf) media outlets.

Weighed MSNBC’s Morning Joe host Mika Brzezinski  who regaled Rawlings-Blake for purportedly giving protesters room to begin rioting:  ‘She’s accusing the media and another critics of taking the line about giving those who we shall to destroy space to do that out of context,’

‘I don’t know how you can take that out of context. It’s just something she shouldn’t have said.’

When one individual decides to hurl molotov cocktail at police one could perhaps argue that too is criminal, yet what are we to then call such action when a phalanx of individuals, including students, residents also begin to throw molotov cocktails?

Are they also criminals? Are they there to steal and incite violence just for violence’s sake?

Or are they deemed criminals because entrenched interests have no real interest in getting to the bottom of these people’s distress and actually addressing their demands? Demands which finally led to overboil and taking matters literally to the streets.

Reflects salon: We need to clarify what we mean by terms like “violence” and “peaceful.” Because, to be clear, violence is beating, harassing, tazing, assaulting and shooting Black, trans, immigrant, women, and queer people, and that is the reality many of us are dealing with daily. Telling someone to be peaceful and shaming their militance not only lacks a nuanced and historical political understanding, it is literally a deadly and irresponsible demand.

What if we flip the argument. When the government decides to preempt our freedom in the face of perceived dangers, including the construction of ‘necessary checkpoints,’ skirting legal requirements which necessitate the need for warrants and the arrest of individuals without legal merit isn’t the government acting as a terrorist and in a criminal manner?

But why is the government absolved of such criticism and often supported by the entrenched corporate media who call for the need of our increased ‘protection’ and state sponsored aggression for the sake of liberty?

Doesn’t that in and of itself sound perverse and a capricious sentiment to maintain?

And yet now that people directly affected by the circumstances that led to one community member Freddie Gray mysteriously dying at the hands of authorities and who have yet to be given answers or a guide as to how things will change take to the streets they are branded as thugs and criminals.

Isn’t that in essence just a cynical ploy by government and vested interests to continue demonizing such individuals and to cast aspersion on legitimate gripe? To negate these individual’s legitimate concerns and to imply that current violent behavior is how or why these people have come to be marginalized and oppressed in the first place?

Vilified and negated because it must be obvious that they brought their negation, oppression upon themselves. At least that is what some would like to sway the public to think.

Whilst history books celebrate the Battle for Independence, the French Revolution, modern media and a 24/7 paradigm ever busy in influencing cultural and society expectations and perceptions hails such behavior as criminal and akin to thuggery.

Reflects jacobinmag: In dueling press conferences and TV appearances, they have tied protests to riots, riots to criminality, and criminality to economic calamity. In so doing, they have shifted the onus from the police to the policed.

This is one of the oldest tricks in the book. Long before broken windows, the partisans of law and order claimed that protests are bound to cause riots, and that riots are bound to cause violent crime and neighborhood decline. In the decades since the urban uprisings of the 1960s and 1970s, the myth of the “riot effect” has been deployed to rationalize the massive expansion of urban police forces and with it, the escalation of policing to the level of low-intensity warfare. 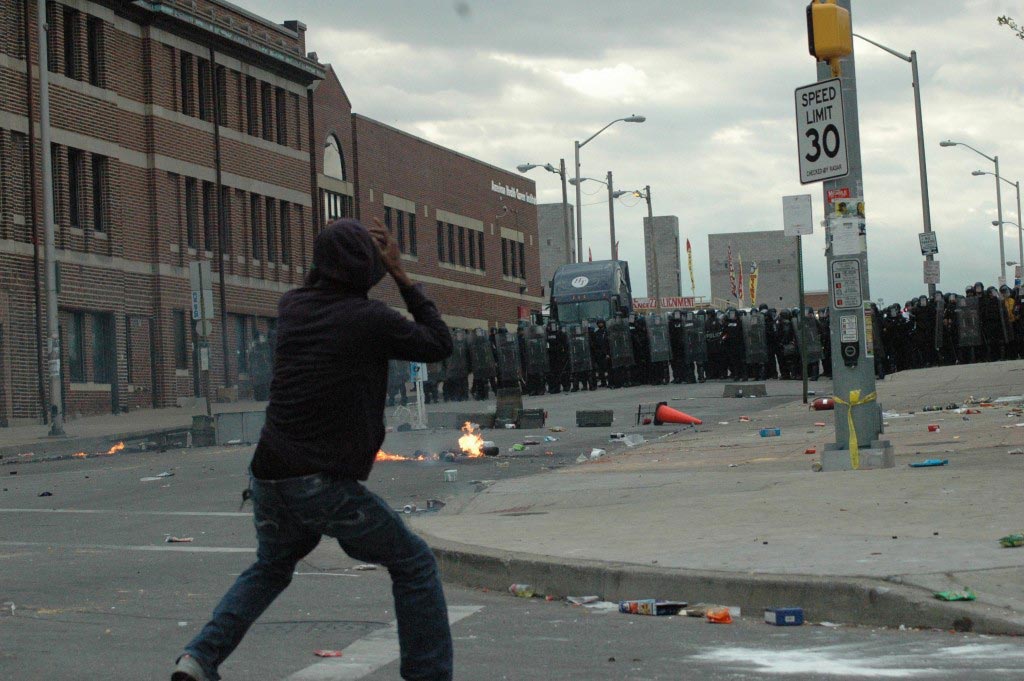 One supposes that we might as well just drop the gauntlet and call protesters as Baltimore official Carl Stokes suggested on CNN: ‘niggers.’

That way we will be rid of the presence that our society and community harbors any real desire to listen to these people’s gripes and be willing to change because implicit is the idea that ‘niggers’ are their own worst enemy and facilitators of violence and crime? After all just open the tv or read the newspaper, it’s there in front of you.

The reality is it not there in front of us. It is often very well kept hidden from us, or skirted or demonized or negated or deflected.

When you turn on your tv later today and watch people from last night torching cars and property ask yourselves this: are they really criminals and thugs as we are being told or a class of people seeking and demanding liberation and attention from their oppression such as your forefathers may have also done in previous times?

All images via video screen shots. 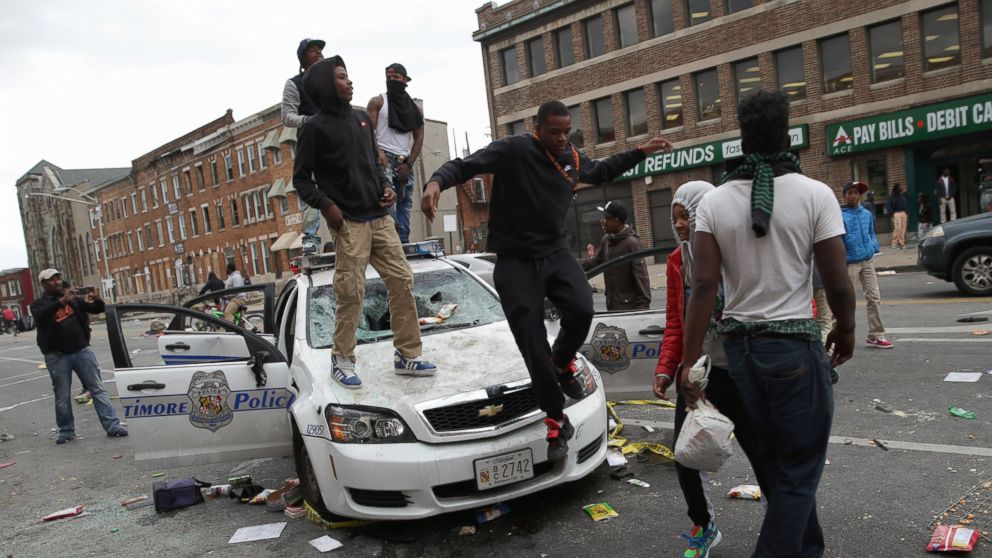 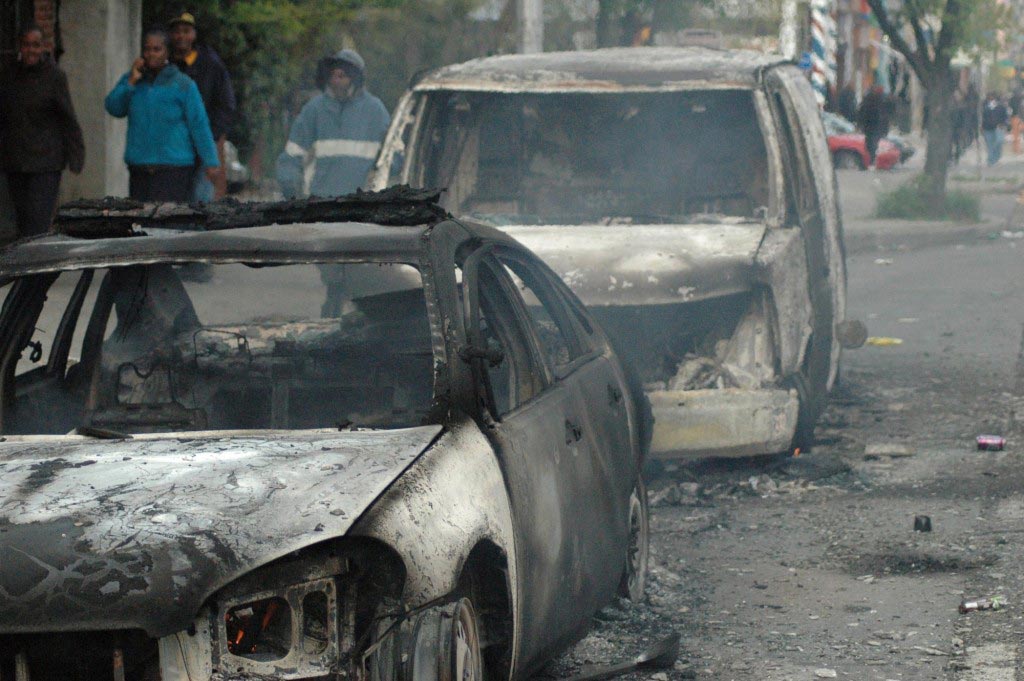 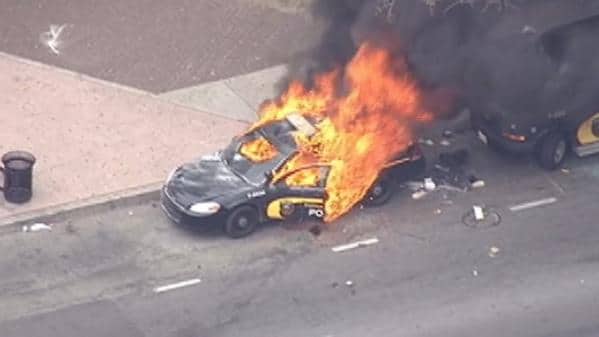