The Samantha Brick meltdown. What to think what to say?

From the leading makers of trash culture (sorry TMZ and Gawker), the Daily Mail in almost 4 days has single handedly disarmed self respecting bloggerswho were too terrified to even comment on what is painfully misogynist themes, to the specter of infuriated individuals who despite assurances it was Ms Brick being wry and too clever have found themselves turning into deranged cyber heads extolling vitriol, the Daily Mail has this time surpassed itself as the leaders of nuisance journalism.

In the space of 4 days, the Daily Mail has managed to surpass itself as the preeminent leader of nuisance journalism (sorry gawker and tmz- but you’ve been handedly beat this time) and how. With their article that came out this past Monday, bloggers, serious news journals and discombobulated housewives have found themselves in utter turmoil as they have had to make sense of one journalist’s attempt to justify her sanctimonious self serving attitude that puts ahead the notion that she is whole and redeemable because she is better looking than most women on the planet, well that is except for Elle MacPherson.

Traditionally known to brilliantly tug at the heart strings of an easily impressionable readership, the Daily Mail has once again reiterated its common theme that at the end of the day, no matter how much we love our girlfriends, wives, mothers, sisters, their value is contingent on whether she is a supermodel, could pass for one, has lost or gained weight in record days after giving birth and knows how to pull the attention of model seekers like actor Leonardo DiCaprio.

A thorough reading of most of the Daily Mail’s articles will see them subversively plugging women as child rapists (how many articles can you keep writing about random 40 year old women robbing the virginity of 16 year old boys?), on the brink of another nervous breakdown or simply a horror show for failing to apply some make up before she made it down to the local gym (where of course she must work out to make sure the paparazzi deem her newsworthy and thus media reliable fodder).

Yet on some level that almost pales with Ms Samantha Brick’s articlewho with a straight face mind you, has attempted (still- if you can believe it) to explain (sorry ‘shatter’) the myths of what women really have got to go through in order to get ahead. What they have to go through in short is a pack of horrid women who are only too keen to destroy them lest they feel intimidated by another woman (because of her beauty of course not her intelligence).

Of course what women like Ms Brick and her elk (the beautiful ones of course) also have to go through is the leery advances of men who secretly want to make out with them and pillage them (thus a handy back up of make up in the handbag will always serve a girl right). The article hardly does anyone any favors except serving to lower the benchmark for thoughtful discussion.

And yet what the Daily Mail has served to do with its narrow minded dribble is to ironically  force (thank goodness one can still find thoughtful writers) a wider dialogue as to what it actually, legitimately is like to be a woman and why so often her value is conditional on her appearance being acceptable to other women and of course palatable to to the good chap who is there to conquer her and inevitably put her in place.

It’s just plain boring, stupid and unintelligent and yet the Daily Mail will forever sanction the discourse of such themes the way a priest accused of shielding indiscreet behavior will insist on punishing those within the congregation who ran off their brother/sister for an orgy  whilst behind closed doors the Pope’s clergy is making off with its own more remarkable and breath taking unmentionables. But then again isn’t that part of the insider joke of why we all read the daily mail, a moth will always be attracted to the brightest light in the room- even if she is wearing a mismatched leotard and insisting she never mean to microwave her toddler.

Never mind, if only we were all as good looking and self assured as the folks at the Daily Mail….

Samantha Brick would like to confess to us its awfully hard being a preferred hawt bixch. 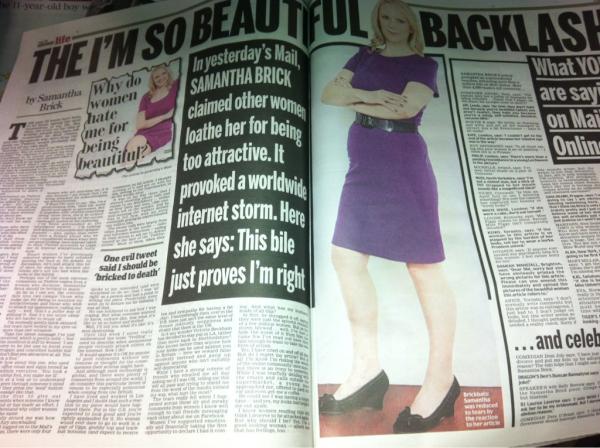