Isn’t it time we showed some ‘unhate?’ How Benetton‘s ad campaign has ended up offending the Vatican and inspired a potential law suit if the clothing manufacturer desist in removing the manufactured image of the Pope locking lips with the head of Cairo’s Al-Azhar Institute Sheik Ahmed el-Tayeb.

It’s almost become run of the mill these days for a fashion retailer to instigate some degree of controversy when it decides to revamp its image and of course its bottom line. Joining the public stage of ‘I can’t believe they did this’ once again comes the Italian fashion line Benetton who has had a long standing relationship with the controversial, and for good reason, it always works to get the name out there in media circles (could you imagine what the pr campaign would cost otherwise?), and ultimately solidly into the public consciousness. Things that the retailer must have been very aware of when it chose to display it’s mouth opening ‘unhate’ campaign.

salon: On Wednesday, the always-provocative brand unveiled its new “Unhate” Foundation with Photoshopped  world leaders engaged in unlikely lip locks. In the name of its message of global tolerance and promoting “human rights and the fight against poverty,” the company has imagined kisses between Barack Obama and Hugo Chavez, Benjamin Netanyahu and Mahmoud Abbas, and Kim Jong Il and Lee Myung-bak.

Of the above images it is said the respective leaders took the tongue and cheek (no pun intended) approach with resigned good humor (it seems complaining about one’s public portrayal wont get you too far in front of a garrulous media). After all who doesn’t on some level wish to see President Obama make out or at least make up with the inflammatory leader of Venezuela, Hugo Chavez, the US’s staunch ideological opponent south of the border? Not that we really expect it, but at least we can appreciate the retailers acute observation and whimsical depiction of political world tensions that the retailer wishes to expose us to as well as ingratiate its image upon. But like many parties, there is always one guest, who will find the depiction of certain motifs or dispositions to be too much for their liking. Which brings us to the Vatican’s hell raising bent to get the Pope’s image off the Benetton campaign.

But why the fracas now? After all if a politician can take some stick why not a religious leader?

You can see why either the Vatican or Al-Azhar, two institutions not traditionally famed for their cheeky senses of humor, might take umbrage. In January, Al-Azhar broke off interfaith dialogue with the Vatican after Benedict called for greater protection of Christian minorities in the Middle East. On Wednesday Vatican spokesman Father Federico Lombardi called the image “a grave lack of respect for the Pope, an offense against the sentiments of the faithful and a clear example of how advertising can violate elementary rules of respect for people in order to attract attention through provocation.”

How interesting. The Vatican can protect members of its flock from prosecution of sexual abuses of minors, the incendiary behavior of rampant same sex trolling amongst monks (or at least choose not to comment) and yet the moment a fashion line chooses to intimate the dichotomies of what a religious order aspires to in the face of its own perverted history of same sex (mis) adventures (something of course the Vatican publicly denounces) it reaches for the skillet to crack over the head of the perceived offending party.

The fashion retailer has since acquiesced and taken down images of Pope Benedict locking lips with Sheik Ahmed el-Tayeb, but part of me wishes they had stood their ground. After all since when can a public figure (which is what the church is ) demand how an outlet chooses to comprehend and communicate its thoughts of said notions, people or identity? Next thing you know it the Pope will be suing you for daring to wear your ‘I love Jesus’ t- shirt because you dared cloaking it in blood or too many safety pins? So much for religious tolerance or should one say convenient intolerance. Isn’t it nice to see nothing much ever changes in the history of religion…?

Of note though is the following, which only reiterates the idea,who’s really gone too far isn’t Benetton, but the church itself…

The Los Angeles Times notes, the Vatican issued a statement saying it would take legal action to prevent the photo’s distribution “through the mass media.”

Just try making me take off my safety pins off my ‘I love Jesus T shirt!’ now… 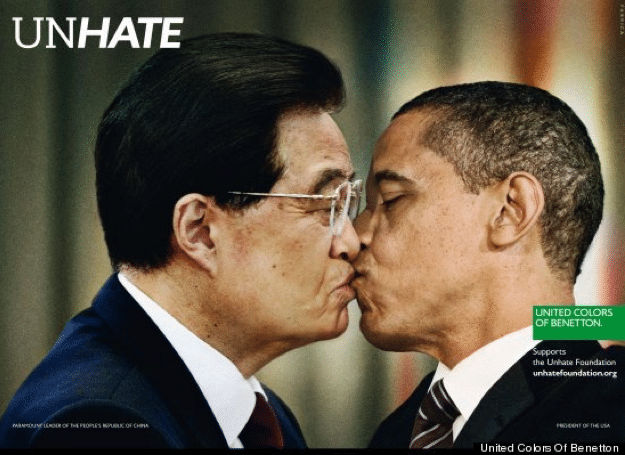