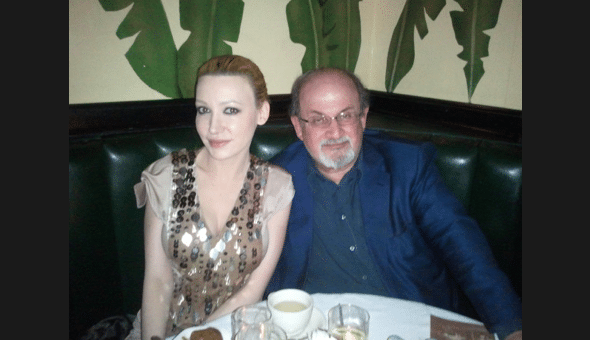 Will she resign? Social Life Magazine Society Editor Demands Devorah Rose vacate her office or he will.

Devorah Rose comes back slinging hard- ‘men will just make you feel bad about yourself.’

Devorah Rose: The Make Believe World of a Social Parasite.

Kids no sooner have I packed the sharpening knives for thanksgiving now I am forced to bring them back out. Why you wonder? To help extricate the fabrication that ladies man Salman Rushdie was being preyed and set upon by Ms Devorah Rose as page 6 allude to when in fact, he has been clearly pursuing her for some time now:

But our beleaguered ladies man decided to sing another song to Page Six: “She is making too much of a casual acquaintance,” he said. After a meal at Indochine, Rose had tweeted, “Great times w @SalmanRushdie. Come back to the states soon so that we can have a do-over.” Rushdie told us, “I’d just like to express my personal embarrassment about your story today linking me with Ms. Devorah Rose. There is not, and will not be anything between Ms. Rose and myself. I am mortified that her Twitter feed suggests otherwise.”

To portray Ms Rose as the aggressor and as our ‘friends’ (blah) page 6 as a saucy aficionado on the prowl is furthest from the truth. Then again this is Murdoch’s media reaching for the tawdry as per usual. Mortified? Oh dear Salman dear, I must say in this instance I am mortified with the candor that you make your assertions as the following communications in my hands indicate that YOU dear insisted on the outings with Ms Rose. Please follow this way ladies and gentlemen…

Second piece of evidence (via twitter):  19 Sept: Why hello there Ms D. FB or suchlike… 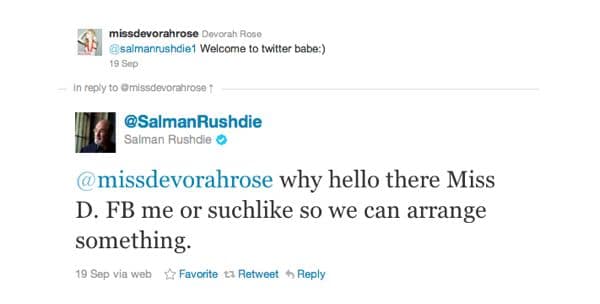 One assumes after their initial outing, courtesy of Mr Rushdie, were an extremely pleasant one or else he wouldn’t continue asking Devorah out to dinner. I swear from where I am sitting I can see the sweat beads pouring out of Mr Rushdie’s carefully wrapped repose…

But here is my question kids, why would a man who’s trying his hardest to be disassociated with Ms Rose be trying so admirably to get to know her? Could there be a hidden motive? Before I reveal Rushdie’s motive lets move on to the next piece of evidence.

salman;  1 Oct: thanks honey! It was fun tonight I thought.

Kids, does this sound like a man who’s running for the hills and is devastated to be associated with Ms Rose? Could it possibly be that Mr Rushdie is trying to protect his skin from a newly single Padma Lakshmi that he once again seeks to reignite favors with now that her billionaire boyfriend that she left him for has passed away? Or are we to believe that Mr Rushdie suddenly remembered that he is a public figure who oughtn’t be seen having too much of a good time or best seen repenting the idea that he favors the company of fine ladies? Coming from the fact that his former flames have said that Rushdie is obsessed with Padma, I think it’s obvious that the former is what is going on.

Please Mr Rushdie, let’s own up to something- it’s all right to have dinner dates, we all have them, but to publicly disavow our dinner dates the next morning for personal currency hardly makes one for appealing dinner company. Which is my way of saying should you seek my company for dinner one night I am afraid I will be out of town, lest I wake up the next morning and read in some tawdry journal that I am now the bane of your existence. Although to be fair to you Mr Rushdie, you do have a very vivid imagination which I must implore you to continue using when it comes to writing your novels. Amen.

Salman Rushdie after the love is gone.

Devorah Rose- the continued drama of being a rising socialite and backstabbed.

No love lost between Devorah Rose and Rachelle Hruska.

NYT pestered Devorah Rose for nearly a year, then prints hit job. The color of Blood.

Devorah Rose rumored to be a party animal…

CW’s High Society gets the green light for season 2 but now needs new characters. But who will fill the void?

Devorah Rose gets in another cat fight.

The bully tactics of the tabloid world gone to hell in a handbasket.