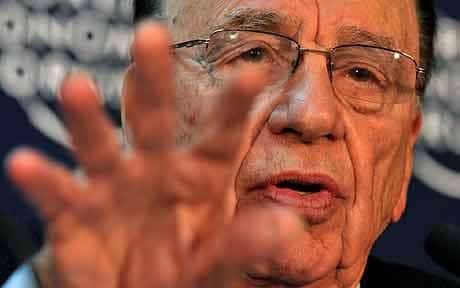 Rupert Murdoch.What was he thinking?

It’s often been the media’s role in society to hold  it accountable for its actions, a barometer, a forum for where the public can judge whether its institutions, politicians, mores and codes are being carried out with integrity. How ironic then that the very apparatus that so many have come to implicitly rely on has been exposed to be  flawed and tampered to the core that the public can no longer without degrees of disgust and cynicism accept what so many media entities dare call journalism.

In so many ways, Rupert Murdoch’s ‘News of the World,’ the UK’s biggest newspaper (which as most of now know by now will be shut this weekend as some sort of attempt by its owners News Corp to accede culpability of its actions, but perhaps more to score political points as it now lobbies to acquire BSkyB satellite media) has for the longest time being the litmus test for what passes as news that sells. Never mind the themes or the types of articles that it presented its readers (yes – it’s true, as much as society portends it wants stories that get to the truth of our times, it has settled for celebrity hyperbole, pub brawls and the size of some aspiring model’s breasts). But as it now has become apparent what can feed a media behemoth to success can now decimate it as well.

guardian: Since the recent revelations of phone hacking the same British establishment has turned on Murdoch and his empire with a gleeful and often hysterical vengeance. One might think that no other media group ever intruded or transgressed any press code of ethics. But Murdoch’s response has been drastic. He is closing down the News of the World for good, trying like Lady Macbeth to eradicate the “damned spot” that seems to sully all his current ambition. The game on which he embarked 42 years ago may have made him piles of money, but it has proved more trouble than it is worth.

On the surface it appears to be a case of a few bad journalists and perhaps a few less than diligent (or could we wonder complicit?) editors (in this case – the bouquet of flowers goes to NOTW’s editor in chief Rebekah Brooks) for not enforcing a higher code of ethics. But as so much in our society where the grab for money and power is unprecedented one so often sees (never mind what is yet to be exposed yet…) figure heads, institutions and as it now has become apparent the gatekeepers of those institutions (the media) of manipulating rules and codes of conduct.

The National Post rather succinctly sums up what compels so many journalists, editors and the industry to behave the way it does:

The atmosphere of hysterical competition at the News of the World drove editors, writers and administrators to set aside whatever ethics they once possessed and hack promiscuously into the private emails of anyone who might conceivably produce a story — celebrities, politicians, a murdered schoolgirl, families of the jihadist bombings in London, relatives of dead soldiers. Were they insane, these editors who set the hackers to work? Not certifiably insane, probably, but they were crazy — for power, reputation, money and, above all, the approval of their employers.

Where in the past the question that has hampered most of is ‘are we as a society able to have an unbiased media ever really be possible,’ the discussion has now been forced to new draconian levels: can society really have a media where paybacks, secret deals, wire tapping and dossiers of secret information used as blackmail or breaking news scandals are now part of the norm? We may wish it to not, but what really goes on in closed chambers is another thing all together.

With the apparent revelation of the unsavory practices at NOTW, Murdoch’s hand has been forced and for now he will be forced to close a journal that for the longest time brought him mass readership and endowed his media empire a certain tawdry cache which ironically has become the mainstay  template as to what most media entities bother to publish on any given day.

With the advertisers on strike (it’s never good pr after all to be openly linked to established crooked behavior) one has to wonder whether the public will ever go on strike too and eventually refuse to keep patronizing the type of bunk media and reporting that Mr Murdoch has now made the norm.

How ironic then that Mr Murdoch eventually got caught in his own musical chairs routine. Let’s hope he leaves some crumbs for the birds…

Rupert Murdoch has a new idea: Let journalists eat out of garbage cans.

GUESTOFAGUEST.COM CONTINUES ARTISTIC RIP OFF, JOINS THE SOCIAL CIA MOVEMENT TO BE A HOMING DEVICE ON YOUR PERSONA;

Tabloid Sleaze and the players that make it!