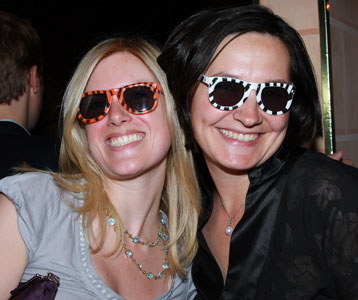 Yesterday Guest of a Guest came out with their edition of who they consider the new choice of socialites- interestingly coined as ‘Neolites’ (a new catch phrase I assume we all better get used to using). That said I was extremely intrigued and somewhat beguiled by their choices, but even more intrigued by the criteria they used to justify our new collective of New York superheroes and soon to be round the clock media whores. What follows is a count by count analysis of what some folk in the media are describing as the new favored class. All we can say is can someone get us on the phone with Patrick McMullan…never mind I’m sure the old man will be calling us up soon…blah!

GuestofaGuest.com: They’ve fled the Upper East Side in search of greener, grittier pastures, but they haven’t completely forgotten their prep school roots. Meet the Neolites: Privileged girls who are re-inventing what it means to be a socialite.

Already we are being informed being a socialite comes with the vestige of being born into the womb of Upper east side society and being groomed by all the prep schools that specializes in the special affectation bridled in manufacturing cultivating esteemed polished young ladies who eventually grow up with their allowances and supposed good manners to become dotted good doers. Of course there’s a caveat, these new breed of ladies are getting braver- because they’re all moving out of the Upper East side to live grittier existences. Gritty- now that’s a word I can use every time I look at post cards with honey suckle images of upstanding young ladies dining on lavender tea and crumpets by day and mojitos and Marlboro lights by night.

That said, let’s have a look at this years nominations of impending gratuitous media exposure. By the way if you don’t happen to be an Upper East side champion, never mind we’ll light a candle for you as we begin the delicate task of exploring your new idols.

GoG: Annabelle Dexter-Jones, Emilie Ghilaga, Kick Kennedy, Chloe Malle and Georgina Bloomberg all had traditional New York upbringings and educations…and then they grew up. These girls still attend benefits and luncheons like their mothers before them; they just wear Alexander WangChanel. They’re philanthropic, but they’d rather travel to the far east than merely attend a luncheon at the Temple of Dendur. And they live anywhere and everywhere but the Upper East Side.

–“….all had traditional New York upbringings and educations…and then they grew up. These girls still attend benefits and luncheons like their mothers before them; they just wear Alexander Wang instead of Chanel.”