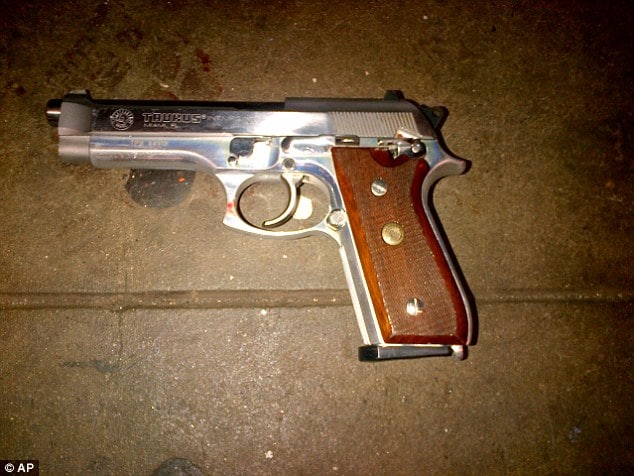 In light of the Ismaaiyl Brinsley shootings over the weekend which saw the death of two NYPD cops, questions have been asked as to whether Brinsley’s actions will fuel further actions against the NYPD by ‘mentally deranged’ individuals as well as whether recent democratic movements in recent weeks to impart change against corrupt police behavior will lose momentum?

In the hours after the killings police union officials and politicians accused those who have protested the deaths of Garner and Brown of fanning anti-police fervor.

Patrick Lynch, president of the Patrolman’s Benevolent Association in New York, would go so far as to say that there would be ‘blood on the hands’ of demonstrators and elected officials who have criticized police tactics, specifically citing Mayor Bill de Blasio.

Tellingly the remark would come after Mayor Bill de Blasio spoke about Garner in the context of his son, who is black in the wake of the decision not to indict Daniel Pantaleo in relation toEric Garner‘s death.

Offered the mayor: ‘Is my child safe, and not just from some of the painful realities of crime and violence in some of our neighborhoods, but safe from the very people they want to have faith in as their protectors? That’s the reality.’

The mayor’s thoughts have since been said to represent evidence that the Mayor inspired demonstrators to go on a limb and take ‘vigilante justice’ in their own hands. A point of view which is all too convenient and wishful thinking by those who would wish to deflect all criticism of police behavior (and there is a lot to criticize) and pretend that one man’s thoughts somehow galvanized other individual’s to go out of their way and seek ‘vigilante’ retribution for perceived injustices.

In reality all Bill De Blasio has done is called for improved policing, including better community relations and new training for ‘de-escalation‘ techniques. A sentiment shared by many citizens all over the country.

Yet that is not the way various police factions who turned the backs on Blasio the other day during a commemoration of the slain officers see it.

Whilst police brass were regaling protesters and politicians for simply wishing to hold police accountable for their actions, former New York Gov. George Pataki would go on Twitter to tell he was ‘sickened by these barbaric acts, which sadly are a predictable outcome of divisive anti-cop rhetoric of #ericholder & #mayordeblasio.’

Really George? Do you think so? Or are you like some in the media using this an opportunity to deflect on further regard of police practices and to further demonize those of us who resort to peaceful practices to impart change and a deeper regard of our society at large?

Former New York Mayor Rudy Giuliani would go on further and lash out not only at New York Mayor Bill de Blasio but President Barack Obama and Attorney General Eric Holder as well.

Speaking on Fox News, Giuliani said: ‘We’ve had four months of propaganda starting with the president that everybody should hate the police.’

‘They have created an atmosphere of severe, strong, anti-police hatred in certain communities, and for that, they should be ashamed of themselves.’

The reality is, despite what these police organizations and their allies allege, there isn’t an anti-police movement in the US.

The people demonstrating for Eric Garner and Michael Brown aren’t against police, they are rather for better policing. A distinct difference than calling for the shoot down of cops.

Reflected slate in a thoughtful essay:  They want departments to treat their communities with respect, and they want accountability for officers who kill their neighbors without justification. When criminals kill law-abiding citizens, they’re punished. When criminals kill cops, they’re punished. But when cops kill citizens, the system breaks down and no one is held accountable. That is what people are protesting.

In the face of the Brinsley shootings, the Garner and Brown families would issue statements repudiating the officers’ killings, whilst civil rights leaders took to the airwaves to try to put some distance between the movement and the crime.

Told NAACP President Cornell William Brooks on CBS’s “Face the Nation’: ‘To link the criminal insanity of a lone gunman to the peaceful protests and aspirations of many people across the country, including the attorney general, the mayor and even the president, is simply not fair.’

And then there were these reflections on the web that caught my eye:

The response from the NYPD and right-wing politicians to the shooting of the two officers reflects just how anti-democratic, authoritarian and militaristic police depts have become over the past decade.

‘The mayor has blood on his hands,’ said the SBA. ‘We warned that the street protests — which were incitements to violence — could not be tolerated, could not be allowed to go on,’ said the PBA.

This is near-mutiny along with a call to prohibit public, democratic protest.

A leaked PBA memo has the PBA saying it is now a “wartime” police dept. This”war,” it must be noted, is with the people of New York City.

The militarization of the police and the police-state mentality and infrastructure that has been built since 9/11 all have ominous implications for the American people.

Has the country really become more divided or it is just that the media is only presenting us with the extremes, as that improves their chances of higher ratings?

Sorry, but the leftists media narrative has essentially been that cops as a group tend to be racist thugs that seek out innocent black men in order to act out their KKK fantasies of killing black people… then you try to claim that “no one” is trying to stoke an anti-police movement?

Condemning the violence and calling for (shudder) civilian oversight of rogue cops. Yeah, arrest them and lock those dangerous people up right away. Maybe use some enhanced interrogation techniques on them. That’ll put those uppity ones in their place, eh Bubba?

Patrick Lynch should step down. Americans have the right to condemn police brutality, as it too is illegal. To say that protesting police brutality is the cause of this murder is ridiculous, and tyrannical. Killing, or beating minorities is un-American, and it is criminal minded Police who act violently outside of the law who are culpable. They created this social backlash. If anything Lynch should have advocated that everyone pay respects to the officers, and tone down any inflammatory rhetoric.

Cops haven’t been slaying anybody. Blithering imbeciles have been deliberately provoking police. Just repeating the lie only works with people as stupid as you.

When will the media start calling the NYPD’s brazen insubordination what it is: an assault on democracy. They work for him (and, by extension, the voters) not any bullshit “code” or “blue blood” shit they may have concocted into their heads. If Obama’s generals did this to him in such a flagrant manner, we’d call it unconstitutional if not outright fascism, but when it’s the NYPD – a department larger than the FBI – the press covers it as a goddamn personality dispute.