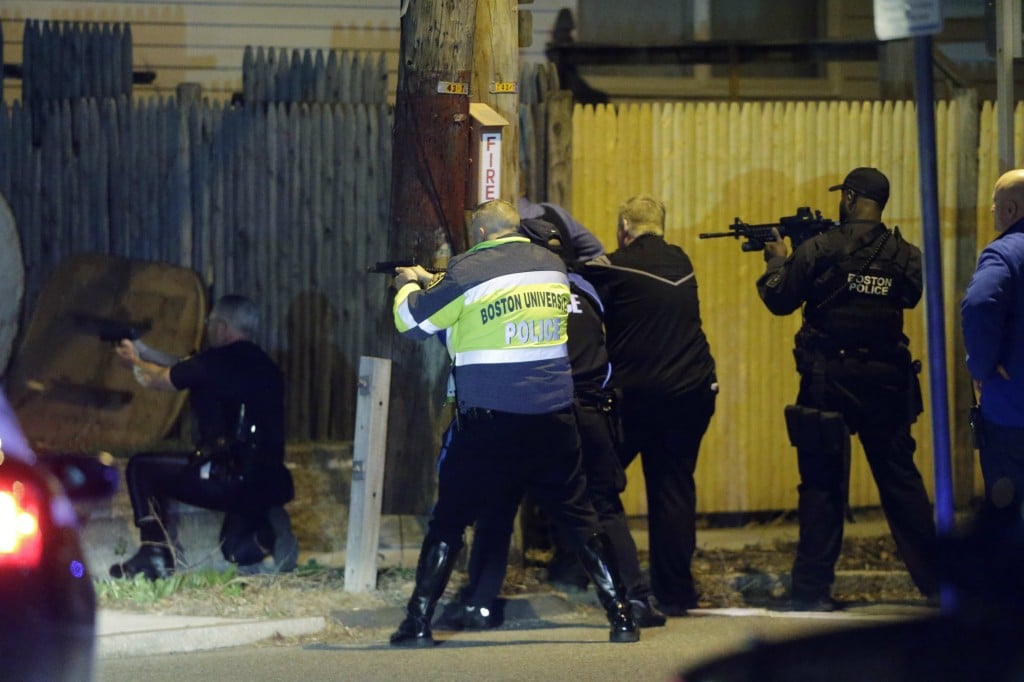 A flurry of drastic activity has led to the FBI confirming this early Friday morning that one of the Boston Marathon Bombing suspects is now dead after being taken in by authorities after a robbery and subsequent high explosives shoot out with authorities, whilst another, is still at large.

The action began circa 10.48 pm Thursday evening after gunshots were heard outside outside a building at ivy league university MIT. It came after the two suspects after having robbed a 7-11, shot and killed a MIT police officer. From there the two hijacked a car where they were subsequently engaged by police following a high speed car chase which saw one officer seriously injured. From there authorities were able to close in on the suspects who were by now shooting at them from behind the carjacked black Mercedes.

In due course authorities were able to apprehend one of the suspects who would later die of their wounds in custody whilst the other suspect managed to flee as they got back into the stolen SUV and was able to drive right through a police cord at accelerated speeds.

At present authorities have warned residents of the town of Watertown area to be on high alert and under no circumstances should they pick up anyone of the road as they continue to vet the area.

Describes the nytimes in startling detail:

A Watertown resident, Andrew Kitzenberg, 29, said he looked out his third-floor window to see two young men of slight build in jackets engaged in “constant gunfire” with police officers. A police SUV “drove towards the shooters,” he said, and was shot at until it was severely damaged. It rolled out of control, Mr. Kitzenberg said, and crashed into two cars in his driveway.

The two shooters, he said, had a large, unwieldy bomb that he said looked “like a pressure cooker.”

“They lit it, still in the middle of the gunfire, and threw it. But it went 20 yards at most.” It exploded, he said, and one of the two men ran toward the gathered police officers. He was tackled, but it was not clear if he was shot, Mr. Kitzenberg said.

The at large suspect seen in earlier released still video tapes wearing a backwards white baseball cap is thought to be that of Sunil Tripathi, a student at prestigious Brown University. His family had gone on to report that he had gone missing since March 16th and had even posted a Facebook help account to locate their son. They have since this morning taken down posting. The deceased suspect has since been identified as Mike Mulugeta.

Perhaps most alarming is the fact that a pressure cooker, the same type used in the construction of the two bombs that went off Monday was also found in the town of Watertown leading some to speculate that the suspects were perhaps planning another round of terrorism. In due course it would later be reported that authorities detonated explosives in the area which led to two police officers being hurt, whilst a mystery package which turned out to be harmless was also found at the MIT campus.

Perhaps what makes the latest news unsettling is the realization that the terrorists that many had thought were foreign nationals from the mid east or even worse renegade political outlets here in the US were what appears to be disenfranchised university students, with one of them from Brown suggesting either an ideological imperative or worse a devil may care cavalier attitude to violence that has once again engulfed the day to day machinations of daily life in America. Which of course raises the question what exactly is going in American culture that has once again seen the prevalence of unprecedented violence and aggression towards a wider body collective?

UPDATE: Dzhokhar A. Tsarnaev, 19, of Cambridge, Massachusetts, has been named as the identity of the second suspect at large whilst that of Sunil Tripathi has been taken down as a possible suspect.