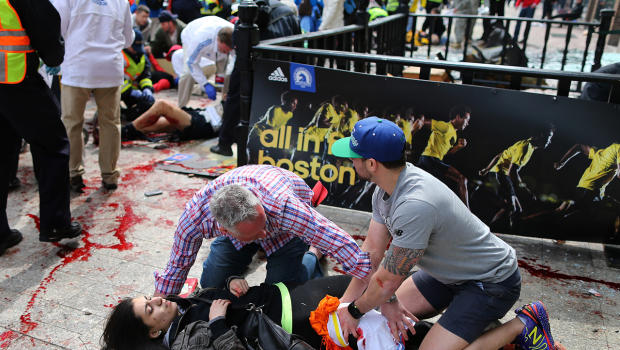 In the aftermath of the Boston Marathon bombing which claimed the lives of 3, injured up to 173, 17 seriously authorities to date have yet to come up with any leads as to who is behind the attack.

At present no persons or group has claimed credit for the twin explosions which detonated near the finish line near Boston’s Copley Square.

Law enforcement agencies have also gone on to question an injured Saudi national at a local hospital but media outlets are reporting that the individual has no connection to the case but was simply a frightened spectator who at the time attempted to flee the pandemonium before being tackled by bystanders.

Csmonitor goes on to tell that last night agents from the FBI, the Bureau of Alcohol, Tobacco, Firearms, and Explosives (ATF), and other law enforcement agencies raided a unit in a high-rise apartment on Ocean Drive in the seaside Boston suburb of Revere, according to information posted online by a participating local fire department. Several bags, including what appeared to be a large duffel bag, were removed from the scene. Authorities were mum as to the specifics of their suspicions but confirmed that the Revere search was related to the case.

Although President Obama in his address to the nation last night did not use the word terrorism, US officials have gone on to say that they are indeed treating the attack as such.

Preliminary research indicates that the bomber or bombers were not highly skilled. The explosive devices were relatively crude compared with those produced overseas by Al Qaeda or other radical Islamist terrorist groups, RAND Corp. terror expert Brian Jenkins told Los Angeles television. They were much smaller than the powerful truck bomb that Timothy McVeigh used to devastate the federal building in Oklahoma City in April 1995.

Noted some terrorist analysts, the bombs were not directed against a government building or institution, which is often a hallmark of disaffected, lone-wolf domestic terrorists. And the style of the attack, in which one explosion was closely followed by another, mimics that used by numerous groups in the Middle East, according to these experts.