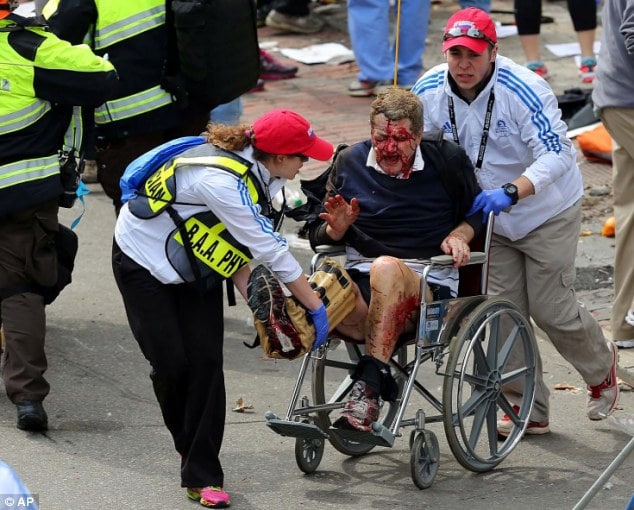 Boston this Monday afternoon has been rocked by two savage blasts that took place near the finish line of the Boston Marathon as it was taking place. At present it is not exactly how many have died in the blasts, but the NYPost is reporting up to 12 people have been killed, with up to 60 individuals injured and scores with missing limbs. Present reports indicate 2 confirmed deaths and 23 injured.

Eyewitnesses have gone on to say that there were two blasts that went off, five seconds apart from each other, with the blasts believed to have emanated from the Fairmont Hotel nearby. Nearby streets are said to be awash in blood.

The blasts went off at 4:10 into the marathon, which is minutes away from last year’s peak time for marathon finishers at 2.50pm local time.

At present authorities are urging everyone to immediately evacuate the area as secondary devices were also discovered. It is known that a controlled explosion was detonated outside the city library at 4.20pm as authorities now seek possible other bombs set to go off in the vicinity. Initial media reports have indicated that the bombs were homemade.

Roupen Bastajian, a 35-year-old state trooper had just finished the race when they put the heat blanket wrap on him and he heard the first blast.

“I started running toward the blast. And there were people all over the floor,” he said. “We started grabbing tourniquets and started tying legs. A lot of people amputated. … At least 25 to 30 people have at least one leg missing, or an ankle missing, or two legs missing.”

Cherie Falgoust was waiting for her husband, who was running the race told the following:

‘I was expecting my husband any minute,” she said. “I don’t know what this building is … it just blew. Just a big bomb, a loud boom, and then glass everywhere. Something hit my head. I don’t know what it was. I just ducked.”

Competitors and race organizers were crying as they fled the chaos.

State and local officials told CNN’s John King that there was no known credible threat prior to the explosions.

The marathon said in a statement: ‘There were two bombs that exploded near the finish line in today’s Boston Marathon. We are working with law enforcement to understand what exactly has happened.’

A trauma nurse told ABC that the race’s medical tent has become a makeshift morgue and that staff are dealing with injuries including severed limbs, shrapnel wounds and children with severe burns.

State and local officials have gone on to tell media outlets that there was no known credible threat prior to the explosions that would lead suspicions into a day that is being marked as the Boston Marathon Bomb explosions.

President Obama has been notified of the incident in Boston. His administration is in contact with state and local authorities. He directed his administration to provide whatever assistance is necessary in the investigation and response.