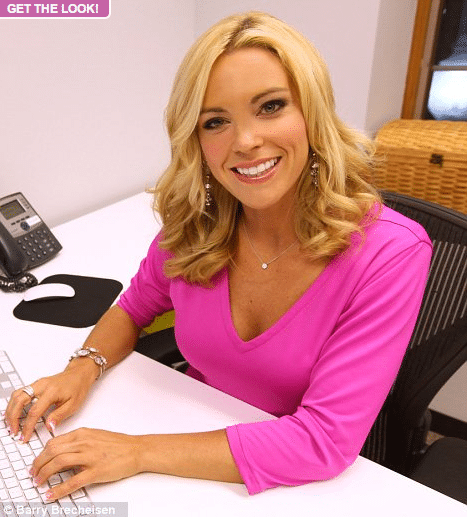 Before the public had ever heard of her Kate Gosselin was just a normal person living a fairly typical unobtrusive life in middle America. But then something happened. She became a reality actress, (which in itself is quite the beguiling oxymoron, since when do actors act their own reality?) and slowly over the course of 4 years has markedly transformed herself from middle America to what middle America aspired to be should it ever make it to tv. Which is a roundabout way of saying Kate Gosselin and others like her plucked out of obscurity not because of any particular talent but more to do with her situation (her brooding 8 kids) have now managed to transform themselves into Hollywood aspirational actresses despite the fact that they were chosen to appear on TV for the complete opposite reasons.

dailymail.co.uk: ….if the reports are true it wouldn’t be the first time, Kate got a tummy tuck in 2007 before boosting her bust with a breast augmentation in 2009.

According to Us Weekly magazine the Coupon Cabin blogger uses the sunbed three times a week and also uses Botox regularly.

A source close to the star told the magazine: ‘She’s consumed with her appearance.’ 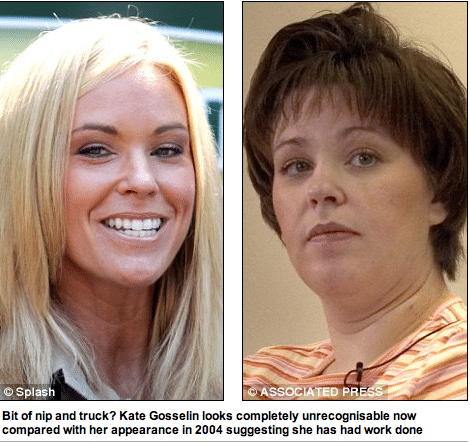 Consumed with her appearance as much as we the public are consumed by these anointed individuals living their very public existence in a looking glass.

Yet as much as Kate might be playing for a chance to return to the magic screen (and the money that comes with it) it may well be all the plastic surgery has been for nothing as no offers have come forth (yet) as she now takes on a position blogging about food coupons. Quite the fall from grace.

Time will tell if this reality actress was just a one hit wonder who’s outrun the public’s fascination with her or whether she can re invent (and if that includes plastic surgery so be it) herself to play a new role the way traditional actors scrub and play new roles. Of course that might be hard to do when the only role you know how to play is being a disenfranchised washed up Middle American suburban mum caught off guard by the changing of the tide.

Never mind, at least Kate looks great for her age. Sort of… 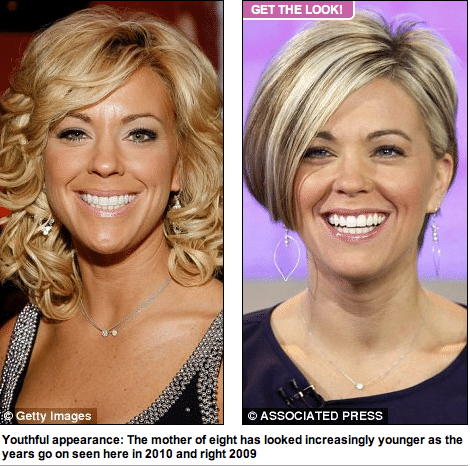 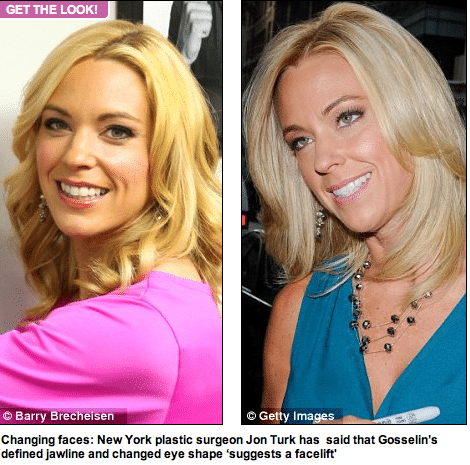 Kate Gosselin is going back to being poor.

SARAH PALIN WANTS TO TELL YOU ABOUT HER KATE GOSSELIN CAMPING DISASTER.

HOW YOU BECAME A MODERN DAY CELEBRITY.

KATE GOSSELIN DITCHES HER KIDS FOR A TANNING SALON.

IT’S THE WORLD’S FAULT KATE GOSSELIN DOESN’T GET IT.

NY MAGAZINE WANTS YOU TO KNOW THAT JON GOSSELIN IS STILL A HUMAN BEING.

THE FAME GAME: HOW THE NOUGHTIES HAVE CHANGED THE FACE OF CELEBRITY.

THE INS AND OUTS OF MEDIA WHOREDOM.

KATE AND JON GOSSELIN ARE INTERRUPTED IN THEIR GRAB FOR SLEAZE AND FAME BY THE AWKWARD REALIZATION THAT THEY ARE STILL PARENTS.

KATE GOSSELIN BREAKS DOWN ON TV SET BECAUSE SHE IS SICK OF LIVING HER SURREAL LIFE.

TIME TO FEEL SORRY FOR A REALITY STAR…

REALITY STAR OWNS UP THAT THEY ARE A FAILURE.