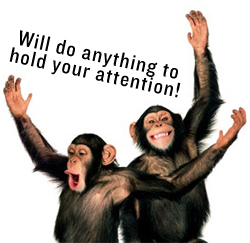 When whoring gets boring.

With all the attention-starved stars swinging through the blogs and tabloids, we thought it would be a good idea to try to seperate the wheat from the chaff. We have compiled a list of media whores that are in (not that that is too great of a compliment) and whores that are out (heartbreak city). Here they are:  the Ins and Outs of Media Whoredom.

Papa Lohan– this guy is hilarious, get him a reality show, stat! What’s that? He already has one? Get him another one! About boxing!

Balloon Boy– dripping with publicity, this little pain pulled our attention to the mountains with his pretend exodus. The apple doesn’t fall far from the tree: his parents are two-time “stars” (whores) of the reality TV show Wife Swap (shudder).

Kate Gosselin– Having eight kids was a good publicity stunt. Getting seperated from your husband was good, too. Our favorite ploy for attention, though? Getting a haircut so bad it HAD to have been intentional. The Media’s cameras are currently trained directly on that quaff. It just happens that her unfortunate person is attached.

Bill O’Reilly– no longer at the top of the rich, white, loud-mouthed, evil men list, O’Reilly is being shoved out of the limelight by Limbaugh’s considerable girth.

Lilo– We love you and will never stop reporting on your car wreck career (metaphorically and literally) but for now, we are bored.

Rush Limbaugh– Did we just say that you replaced Bill O’Reilly? We meant on the “bored with the drab absurdity of your life” list. And you are out as well.

Jon Gosselin– You captured our hearts with your hilarious (and very public) midlife crisis. We don’t really see a future for you, though. It’s not you, it’s… well, it is you.

Sarah Palin- You went rogue, you wrote a book about it, you invented death panels, what more can you do? You are the queen of political chaos and that works for you, but whirlwinds always seem to dissipate fairly quickly. Out.