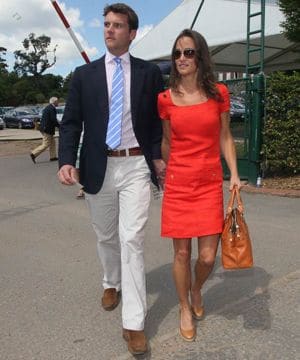 The world can now sigh in relief now that Pippa is back with Alex and gracing us with their presence.

Kids, I have to be honest for a few weeks I was bouncing off the baby turquoise bedroom walls wondering when my Pippa would once again find love- but the truth it seems is that it never left her…

mirror.co.uk: Despite reports of a split, the couple showed the world that their romance is still going strong, by holding hands as they arrived at Wimbledon to watch Andy Murray battle it out in his quarter-final match against Feliciano Lopez.

Pippa, 27, looked stunning in a persimmon dress as she arrived at the All England Club with Alex.

In fact so stunning, me and the chipmunks that like to huddle looking for used beer cans have tried in vain to find our own ready to wear persimmon dress. But them Russian bitches here in Brooklyn have nothing in our size. Typical.

The couple got together one year ago and Alex, 30, was the envy of men round the world as Pippa walked behind her sister Kate at the royal wedding on April 29.

But speculation she had split from Alex surfaced earlier this month after she was pictured at a string of public events without the cricketer-turned-financier on her arm.

It’s true, the chipmunks only just took me off the drip, so worked up was I that our collective Pippa might be unloved and festering deep existential anguish. BUT I’m here to tell you life is starting to slowly get back to normal…

And the rumours reached fever-pitch three weeks ago when Pippa had dinner with close friend and millionaire George Percy, visiting his flat until 2am the next day. There have even been cheeky rumours that Prince Harry, 26, has an eye for Pippa.

He told her she looked beautiful as they giggled together on the balcony of Buckingham Palace after the wedding, and the pair reportedly became close as they helped plan the big day for their siblings.

Ah, them giggling bitches, all lavender tea and designer sunglasses. Which reminds me I need to send out for some of them new Colonel Gaddafi sunglasses too.

But the younger Middleton sister was spotted last week leaving the plush flat of former England all-rounder Alex, having spent the night.

She headed out of the pad in Fulham, West London, at 8.30am – 45 minutes after Alex left for work – and sources say they are as close as ever.

Brrr. That’s how much goose pimples rush that just gave me and the chipmunks. But it gets better:

source said: “Pippa and Alex are both very busy people and each has a big circle of friends. They might not get to see each other all the time but that doesn’t mean the relationship is over. Alex adores Pippa and she feels the same. They try to be as discreet as possible about their relationship and make a point of not going to fancy places together.

“There is nothing going on with Pippa and George. They lived together at Edinburgh University and are good friends, but that’s all there is to it.”

One day in the not too distant future when the chipmunks have helped me dust off my tears of jubilation I too will reach out into the sky and hold my breath as Pippa gloriously struts past me with the wanton seduction of a slinky media whore out on the town.

If only I could fit into a persimmon dress too….