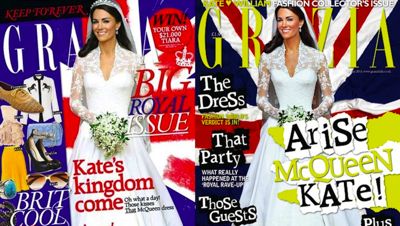 Denial is the preferred weapon when caught in a lie…

It’s seems fashion magazine Grazia has got itself caught in a bind. In it’s latest international release of Kate Middleton on the cover, fissures have been exposed with respect to how it goes about depicting its cover girls.

With respect to the release of the British version of Grazia with Kate Middleton on the cover as opposed to the release of Australian Grazia we are presented an alarming contradiction. Unlike the British version, the Australian version has been spared photo shopping-which only serves to highlight the severity of altercation with respect to Kate Middleton’s figure in the UK version- which ostensibly portrays her to an unwitting public as an emaciated stick figure, which one supposes is what we are to suppose to deem normal and by implication in vogue.

In effect the glaring disparity between the British and the Australian version of the same image of Kate Middleton in her wedding dress serves to show the coercive attempts by the fashion industry to negate women and present them in some preferred idealized version of beauty. But in case you don’t believe us, have a look at the correspondence below…

Grazia: Grazia prides itself on being a publication that champions women and women’s bodies, and we have no reason to make Catherine Middleton appear thinner….

However, in this instance, Grazia did not make any changes to the image of the Duchess of Cambridge in order to make her look slimmer than she is. We did, however, remove the Duke; and the Duchess’ arm was adapted in order to fill in the resulting gap.

Sounds like a legitimate explanation. But let’s back up a bit…

jezebel: In other words, the original picture had the Duchess holding her husband’s arm; they rejiggered it to be holding the bouquet.

Really, this is not a matter of denial or contention. All you need is a pair of eyes; the most charitable explanation is that they did a crappy job on the cut-out and took off some of her waist while they were at it. And if you’re still not convinced, take a look at what ended up on the Australian cover of the same magazine, above. Same photo, similar arm-rejiggering, different waist. Champions, indeed.

So in essence what Grazia seems to be championing are the lies and delusions that it and most of the fashion industry keep feeding us as honey dew skim goodness. At some point one has to wonder when the fashion industry will own up to its flagrant and insistent misbehavior- because frankly some of us are just plain tired of it.

Pippa Middleton wants to show you new never before seen photos on a yacht.