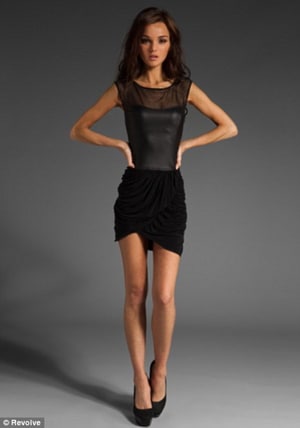 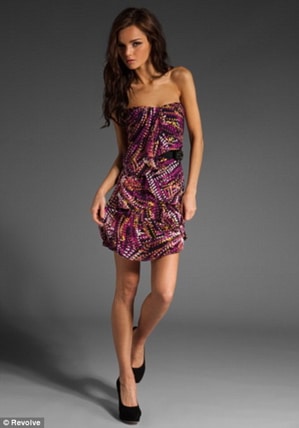 Should you be an emaciated star too?

Stirring controversy in the fashion world today are the latest pictures of City star Allie Crandell appearing on a online fashion website modeling BCBG Max Azria. After readers complained of the actresses ‘protruding stick thin figure’ the images were later removed. Of  course the fact that Ms Crandell was used in the first place by the website (probably to lock in on her celebrity cache- never mind if Ms Crandell actually qualifies as a bona fide celebrity…) opens up a pandora’s box as to what the public is willing to tolerate from the so called arbiters of fashion- the journals and designers themselves.

One image in particular showing her tiny waist and arms sparked outrage among shoppers.

One shopper wrote: ‘As a normal, healthy woman with a healthy body type. How can I possibly imagine what this dress would look like on me when it is shown on an emaciated frame?’

Of course this begs the question- isn’t that just the appeal of fashion? That what we see is a little just beyond us, and because it’s beyond us and implicitly validated and heralded it by default becomes the desired hubris of most individuals aspiring to validate their own identity.

And what of the site that chose to feature her?

Revolve have promised not to feature Crandell on their site until she puts on weight.

The spokesperson said:  ‘We are working closely with both the model and her agent to get her to a healthier size.

Doesn’t this sound cynical? That the model is being counseled and not the magazine who chose to herald her. Is that not a double standard? And why is it that such fashion journals fail to take responsibility for their actions? In fact one could possibly argue it’s media sources like Revolve that help keep distorted images of unhealthy individuals in the public eye as the preferred yardstick. Shameful stuff one wonders…

‘She won’t be appearing in any of our new product batches or in any of our fashion editorial photos moving forward until the issue is adequately addressed.

‘We have been attempting to respect the privacy of the model in question while dealing with the issue on our end.’

Which is akin to saying- ‘this time we got caught going too far, let’s hope the media storm blows over bitches.’