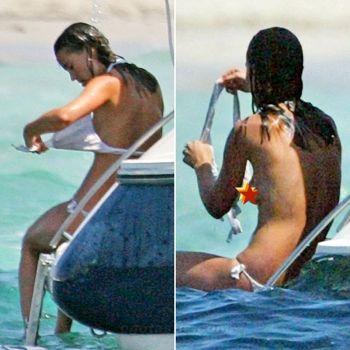 Pippa Middleton would like to explain how she got her figure.

Hype is being building lately pursuant to the release of images of Pippa Middleton sunbathing off the coast of Ibiza topless that her and her family will seek an injunction against those press agents that continue to depict said images:

ontheredcarpet.com: Now a legal battle is brewing over the publication of the 5-year-old photographs which show Pippa sunbathing topless (Warning: contains explicit content, which were posted on websites like Egotastic, Fleshbot and ScallyWagAndVagabond. The photos show the 27-year-old vacationing in Ibiza with Prince William and her older sister Kate Middleton, now the Duke and Duchess of Cambridge.

First of let’s all agree that Pippa Middleton is a public figure who by virtue of her proximity to the royal family is now fair game. Which then brings in the next question- if that is the case then what should we consider appropriate depiction? Had we shown images of Ms Middleton topless in the privacy of her own home that could conceivably be judged to be poor taste and trespassing. With respect to the above images- we are only showing images that first became available on the web of Ms Middleton in a public space- that is the Mediterranean sea.

Then there’s this to consider:

The independent press commission will determine whether newspapers which published the photos have violated Middleton’s privacy, or whether there are any “public right to know” issues which would justify publication. European law protects privacy and free expression, leaving interpretation up to judges to determine which apply.

Which is to say, what happens in the jurisdiction  within Europe or the UK is up to the discretion of those agents, but when US based press agent such as ourselves, fleshbot and egotastic decide to release those images- one would reasonably assume those entities have little or no recourse to our decision to release said images.

Then there’s the issue of aesthetics. Why is the public pandering so wildly over images of Ms Middleton topless? To be frank most women in western states (for the exception of the US- we can thank puritanical mores) do bathe topless. It’s par for the course. Are we to imagine that Ms Middleton’s breasts are that more stellar or to be news worthy because of her proximity to the British royal crown? That in our opinion is sheer nonsense. She is after all just another young woman reveling in her existence and for that we applaud her and that is why we chose to depict said images.

One day the public might get over their fascination for supposed mythical figures living like normal human beings, but until then as an agent of the press, we are willing to provide a forum where such debate, observation can be disseminated in the public sphere. Something that no celebrity or royal should ever attempt to circumvent…