George Zimmerman punched face bragging: Did one of America’s most notorious individuals simply get what was always coming to him?

It seems there is little love lost for George Zimmerman after the former Florida nightwatchman acquitted over murdering 17 year old African American teen Trayvon Martin in 2012, was punched in the face over the weekend.

The spectacular drama comes courtesy of Zimmerman’s ever wayward life which this time (among many other instances) saw our Florida action man embroiled in a physical altercation which led to the timeless media sensation being allegedly walloped by a fellow diner who took exception to the bragging security fellow.

According to transcripts obtained by WFTV, Zimmerman got himself into an argument with a nearby diner at Gators Riverside restaurant in Sanford, Florida, who didn’t appreciate our collective hero being smug about a/getting away with killing someone and b/ and the underlying tension that shooting black people is just par for the course.

Walloped in the face, Zimmerman called 911 to report he had just momentarily been assaulted while trying to strike up a ‘casual’ conversation.

Overheard by witnesses at the time was Zimmerman telling diners, ”I love your tattoos. My name is George Zimmerman, you know, that guy who killed Trayvon Martin?’

Witnesses tell of a ‘large man’ approaching the table and saying ‘You’re bragging about that?’ before punching Zimmerman in the face. According to Zimmerman, the man had prior to punching him in the face, also threatened to shoot him dead. Do you suppose?

What goes round, comes round?

In his defense, Zimmerman insists he had told fellow diners that he had only resorted to shooting Trayvon in ‘self defense.’

Of note, the individual who punched George Zimmerman in the face has not been identified. But in the event he is, one senses he might find himself getting a whole bunch of pats on the back….

Me when I see the guy who punched George Zimmerman for bragging about Trayvon Martin’s death pic.twitter.com/prqcJRuhNY 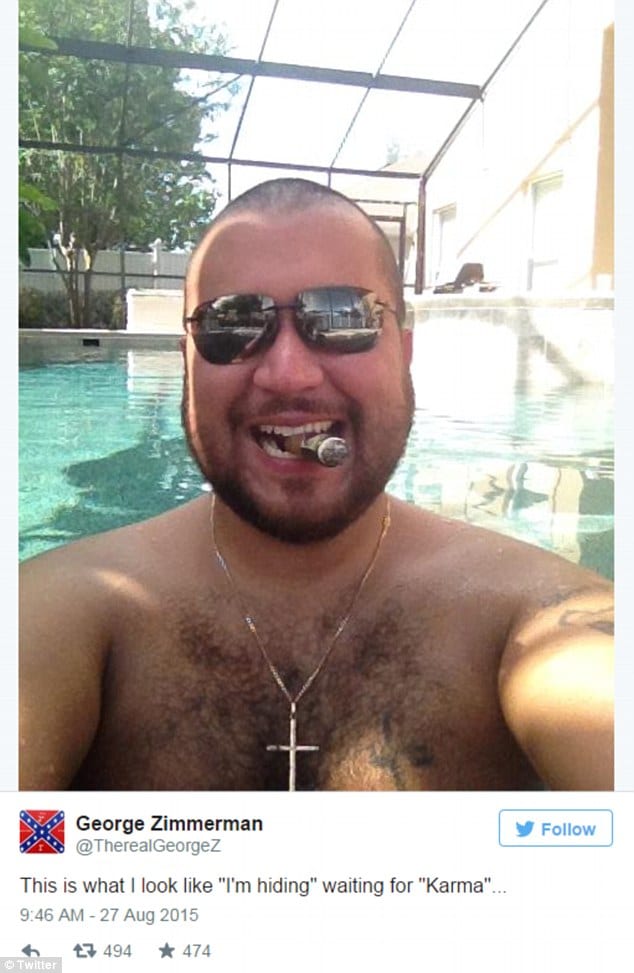