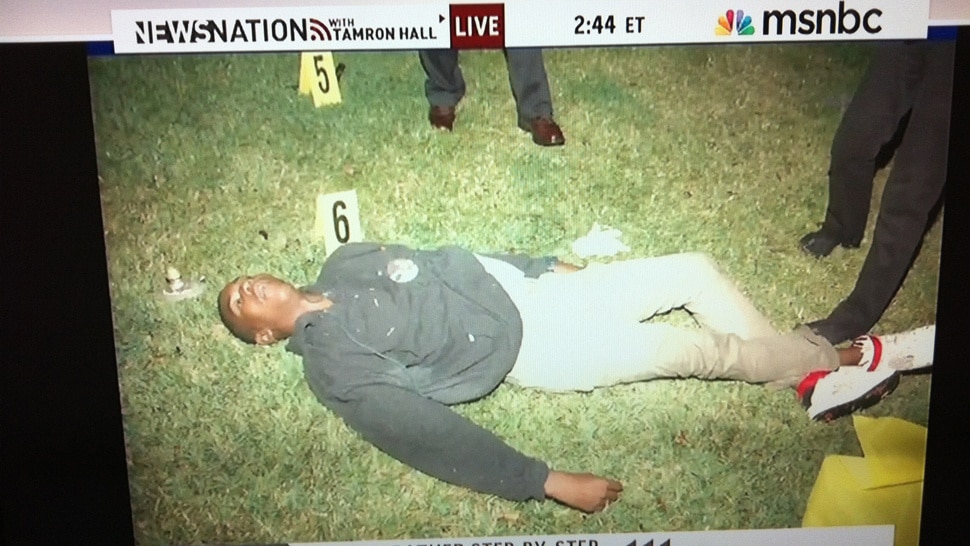 We are not Trayvon Martin tumblr page prompts suspicion.

Gawker media’s decision to release an image of the dead body of Trayvon Martin has led to wide criticism of the outlet and a deeper reflection of the role of media.

At heart media pundit’s are wondering whether the release of said image was purely sensational, a grab for traffic dollars, a desire to shock, titillate and ostensibly a disregard for the family and memory of Trayvon Martin or perhaps even a legitimate desire to be newsworthy?

Told the website in choosing to release said image:

A reader of mine sent me this photo last night. As the murder trial of George Zimmerman wheezes to its conclusion, the TV networks dutifully pipe in live pool video from the courtroom, as if it is force-fed to them and they have no choice but to excrete it, soft and undigested, into our living rooms, bedrooms, offices. Sometimes, the pool recorder or the networks’ producers don’t switch to a mundane image of lawyers being lawyerly quite fast enough, and we get to see snippets of the human cruelty, stupidity, and frailty that occasion trials such as this.

This is Trayvon Martin’s body. These are the last skinny jeans he wore, cuffed once at the bottoms. These are his stylish kicks, his sockless ankles. There are Trayvon’s taut neck, his slack jaw, his open eyes.

This is what happens. Not just when we input “black” and “teen” and “hoodie” and “night” into our onboard computers and output “DANGER,” but also when we find the aftermath Newsworthy, and must consume it voraciously from start to finish, but insist that we cannot stomach seeing the bones and gristle on our plates.

Which brings us to the core question. Is a picture of a dead man’s body newsworthy? Is it really about journalism? But then again who said media really has anything to do with being newsworthy in the first place anymore? Can’t we agree that media has morphed into hyperbole, google chasing key words and inane entertainment? Which is to say do we really still expect media to be responsible to provide us with real hard hitting journalism and if so then why as consumers do we spend hours ogling over nonsense images of celebrities plastic surgery?

What makes an image of a dead body over that of a celebrities’ new pedicure any less taste worthy? Both do not improve our lives, communicate any important meaningful information to us but both in their own way also serve to contextualize our society at large, the prevailing themes and what we as a society at any moment are talking about.

After all if we are going to spend months talking, digesting, ruminating about whether a young man was justly shot dead or not why not go to the next level and show his body too? Why the desperate need to sanitize the news and what actually goes on in society? Or are images of Kim Kardashian’s new botox injection the right kind of palatable news that we should be consuming?

To Trayvon’s parents, Sabrina Fulton and Tracy Martin, I’m sorry that I feel compelled to share this photograph. Were I a slave to journalistic norms, I would say that it’s somehow in the public interest to see him there. I would point out Florida’s sunshine laws, and the TV network’s incompetence, and argue the inevitability that this image would’ve gained a wider audience than it has already.

But those are rationalizations. They don’t explain my motive: Good old-fashioned rage that this kid is dead because my home state empowered a dullard aficionado of Van Damme and Seagal movie cliches to choose his own adventure. Florida literally gave George Zimmerman license to make up neighborhood threats and invite violent confrontations, confident in the knowledge that he carried more firepower jammed down his sweaty fat waistband than every army on earth beheld before 1415.

I wish I were a better person than that, but I’m not. People come up short all the time, after all. I suppose it’s a good thing I don’t have a gun.

Gawker founder Nick Denton went on to defend the site against one commenter who alleged that Gawker “did it for the page views, everything else is rationalizations on your part.”

“You’re of course free to speculate about our corporate motives. But as a matter of fact, you should know that a story like is a cost of freethinking journalism rather than a revenue opportunity,” Denton responded. “Think about it. Sure, traffic spikes. But readers like you are unhappy; some may be unhappy enough to boycott the site. Advertising has to be taken down because clients don’t want the association.”

And then there these reactions on the web that made me wonder as well:

Thank you for posting the photo. For months, racists have painted a picture of Tayvon as some drugged-out, super-human, monster predator. But no amount of lies can counter one photo of truth – A child murdered solely due to the color of his skin.

You know what, good. Zimmerman’s supporters were dead set on showing pictures of Trayvon looking like some badass gangster, now they can see what he looks like dead. A dead boy wearing fucking khakis. Fuck this shit and fuck Florida. If you support Zimmerman you support this teenager being dead so fuck you too.

Hey, Gawker. Thanks for fucking up my morning.

I don’t need to actually SEE A GODDAMN CORPSE in order to feel outrage over a person’s death. That doesn’t make me some weird avoidant coward. What the hell is wrong with you that you felt like slapping all of your readers in the face with this? Eat a bag of dicks.

Gawker is 100-percent in the right for showing this photo, and for decrying the sanitized way we cover these events, to the point where political gesturing and hypotheticals outweigh the human reality. It’s one thing to posture on what race have meant here; it’s another to see the result; to see the person for whom prejudice and assumption may have played a role in ending his life.

It’s exactly these kinds of cases where I applaud Gawker’s mission-statement as pertains to journalism — truth beyond sanitization, and beyond objectivity (which even veteran journalists will tell you is capable of obscuring the real story). The U.S. media may have agreed on certain unspoken policies regarding treatment and display of death, and Gawker may have violated them. But that doesn’t mean they’re the right policies, and it doesn’t mean they’re effective. They’re just more palatable, and that’s the last thing you want serious discussion of how to prevent future tragedies to be.