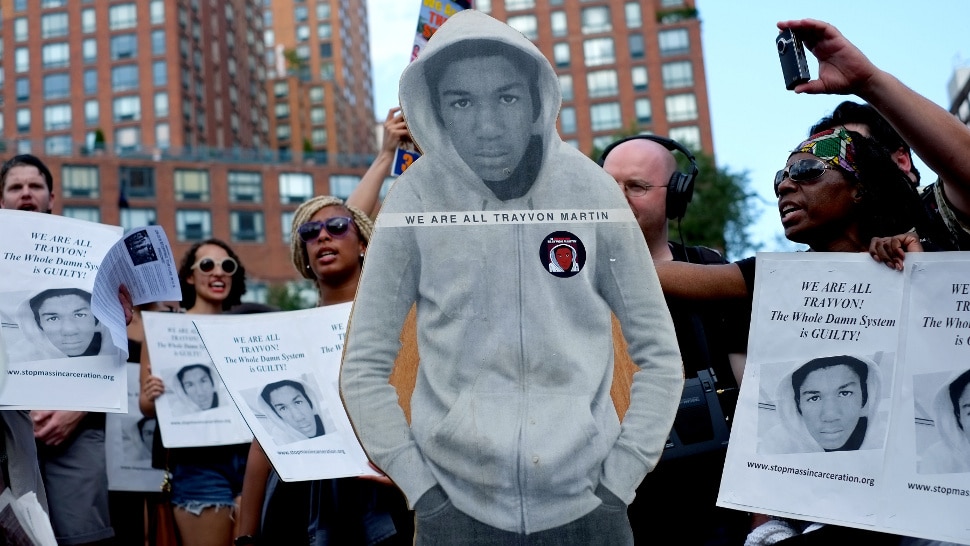 Making head waves is a new tumblr page simply titled We Are Not Trayvon Martin which has managed to inspire the imagination of a collective chagrined by the recent acquittal of George Zimmerman of the 17 year old’s death.

The page started this weekend has gone on to elicit a wide response from individuals contemplating what many see the unjust experience of the 17 year old being gunned down at the hands of George Zimmerman. Or to be succinct the shame, humiliation, disadvantage that they as white people, who not coincidentally are the main respondents, never really have to deal with.

Let me be more blunt: This type of injustice will continue until enough guys like me – guys who are not Trayvon Martin – have had enough of it and finally say “No more.”

If I were Trayvon Martin, I’d be a statistic. Instead, I’m a Harvard graduate. And that’s bullshit.

I am not Trayvon Martin. I am a 23 year old white female with a Harvard degree. I am also a drug-addict, and formerly a vandal, thief, trafficker, fraudster. In short, a bad Brooklyn “gang-banger”.

But I have no criminal record. I have never been arrested, though I have been stopped countless times. When I was 17, I was apprehended by the NYPD. They came upon me taking a hammer to an Upper East Side phone booth, trying to get quarters to buy pills. Did they cuff me? No. Did they take me downtown? No. They gave me a reassuring pat on the back and sent me “home,” hammer in hand.

I turned the corner, continued to walk along the townhouses of Central Park West, running my bludgeon along the iron fences that scrim the dwellings of the elite. A cop car was parked at the end of the block, lights flashing. It was the same one that had stopped me moments before. I could hear the familiar voices of the two police, now raised and shrill. Standing, cuffed, at the bottom of a townhouse stoop, was a middle-aged man in suit pants and a button down shirt. From what I could gather, lurking in the darkness across the street, he had been sitting on the steps to his own home enjoying a beer at the end of the work day. He was a well-dressed, respectful, gainfully employed adult with a home in one of the most expensive districts in town. But he was black. So he was booked. The same cops that had patted my hammer-wielding shoulder and sent me on my way had their hands on the nape of his neck, and were forcing him into the patrol vehicle.

I was more Zimmerman than Martin. I was a violent criminal with a history of drug abuse. But I was white. So I’m alive and unbound.

If I were Trayvon Martin, I’d be a statistic. Instead, I’m a Harvard graduate. And that’s bullshit.

Hi, I’m Paul, and I’m not Trayvon Martin, I am a recovering racist.

I am not Trayvon Martin. In fact, I am a racist. A recovering racist might be a better description. I’m 54 years old and was born and raised in the South. When I grew up, black people were an inferior race. They did low work for us. They lived in different parts of town. We made jokes at their expense. You can imagine the words that we called black people. That’s just how it was. It was institutionalized. Society supported the idea. Now, I am older. I know better. I know that all people are equal and deserve equal rights. And blacks, Latinos, Pilipinos, Vietnamese, and mixed race couples live in my neighborhood. It’s a very good thing. But if you think that I have managed to clean out 10 to 15 years of racial indoctrination, through knowledge and willpower, you would be sadly mistaken. It’s just not that easy. No matter how much my intellect and emotions tell me different. There is that little kernel that is lodged deep within me. I don’t like it. But if I ignore it and pretend that it is not there, it will come out in so many unexpected ways. It will find ways to be racist without looking overtly racist. Left alone, it is dangerous.

I don’t hate myself because of this kernel. I like myself. That thing is down there. But I couldn’t pick where and how I was born and brought up any more than Trayvon Martin could pick his color. It is part of me and will be until I die. But I hope and pray that my brand of institutionalized racism will die with me. I’m not Trayvon Martin, but there is a part of me that is scared and wary of a black youth for no other reason than his race. That part assumes and imagines the worst. It’s sad and wrong, I know. But it’s there. My job, as a recovering racist, is never ever to act on that part. My job is to remember what is true about people. My job is not to pass my racism off to my kids and grandkids. My job is to not assume that a black person in a hoodie walking alone in my neighborhood at night is clearly up to know good, no matter what that part says. I have my own sort of neighborhood watch. But I watch those parts of myself that are stuck inside me.

Like an alcoholic, I will never be cured – just recovering. Hi I’m Paul, and I’m a recovering racist.

And then there was this compelling point made by gawker that made me wonder as well:

It is often forgotten that Trayvon Martin was also defending himself against a man who was clearly stalking him both in a vehicle and on foot, and posed an obvious danger — far more obvious than an unarmed teen holding a bag of candy in his own neighborhood.

The question is, if Trayvon Martin had “won” the fight that night and killed George Zimmerman, would he have been acquitted as well?

Which is to say since when did one’s basic rights suddenly become a privilege? A question that sadly many African Americans and other minorities may argue has been the case for too long…

Nevertheless twitter has responded with  a mixed bag,with some welcoming the effort to come to terms with the African American experience whilst others suspecting it to be an attempt to pander to minority sympathy and look good in the process. Others have even wondered out aloud if it is just more of the same, white privilege unable to help itself yet again. 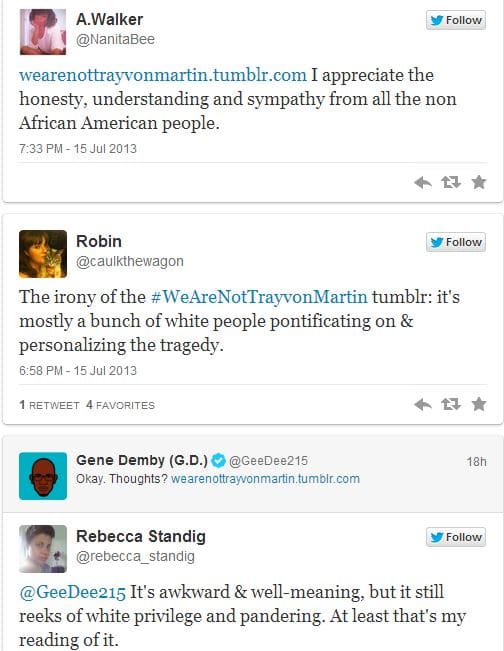