In what could be described as an absurdist surreal Florida plot, George Zimmerman the nightwatchman acquitted in the 2012 murder of unarmed black teen, Trayvon Martin has put the gun used in the killing up for auction.

Acquitted of murder and manslaughter, the 31 year old former neighborhood watch captain indicated opening an online auction for the Kel-Tec PF-9mm, Thursday morning at 11.am.

With suggested bids starting at $5000, Zimmerman describes the gun as an ‘American firearm icon’ which has been returned to working order.

Extols Zimmerman, the poster boy of ongoing media attention/revulsion/fascination: ‘Prospective bidders, I am honored and humbled to announce the sale of an American Firearm Icon. ‘

‘The firearm for sale is the firearm that was used to defend my life and end the brutal attack from Trayvon Martin on 2/26/2012.’

Adding: ‘Now is your opportunity to own a piece of American history.’

The bidding on gunbroker comes as Zimmerman continues to be the subject of wide disdain, with many believing him to have been guilty of the 17 year old teen’s murder. A belief system many believe has been lent credence with a string of violent episodes, including road rage, beating up former girlfriends, since being declared not guilty.

Never mind the ‘auteur’s’ latest foray as an ‘iconic showman’ with a highly functioning working gun. A choice of action which hasn’t necessarily gone down too well with observers.

Challenged on his decision to sell the gun George Zimmerman told Fox News 51 he was a ‘free American’ and so ‘can do what I like with my possessions.’

From there, the demi God claimed he ‘couldn’t care less’ if many people found the move in bad taste while admitting he’d received more death threats than usual after posting the ad online.

Since relegated to a life in hiding, Zimmerman insisted his decision to sell his gun was not going to keep him safe from what he described as ‘radicals.’

If the weapon fails to sell, he plans to lock it in a safe to eventually give to his grandchildren. ‘If I sell it, and it sells, I move past it,’ he explained.

The auctioning of George Zimmerman’s gun comes after the former neighborhood guard only recently had his gun returned to him by the Department of Justice following his murder trial.

A report via the dailymail tells of the tabloid reaching out to Trayvon Martin’s family attorney for comment, with a released statement that read: ‘The Trayvon Martin Foundation is committed to its mission of ending senseless gun violence in the United States. This election season, we are laser focused on furthering that mission. As such, the foundation has no comment on the actions of that person.’ 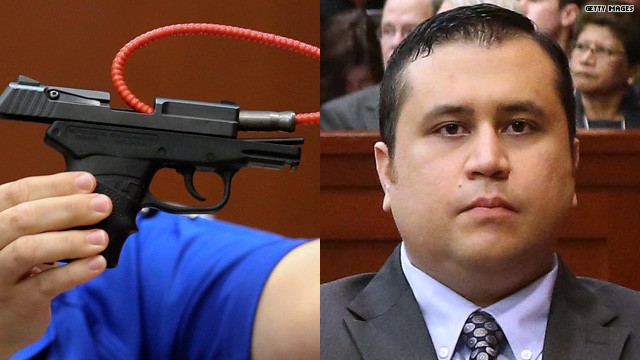 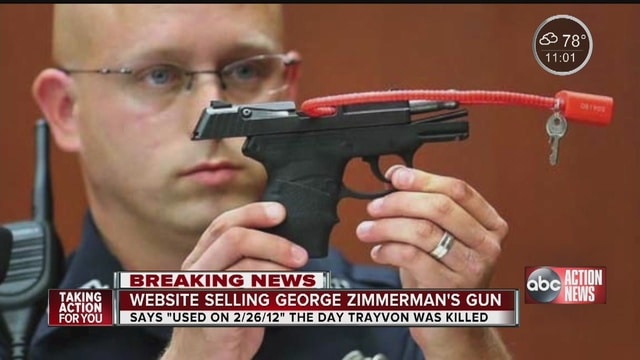 @Ellevation_ ·#Blacklivesmatter I am so excited! George Zimmermann Famous self defense Gun Is Up for action. #TrayvonMartin

If there were a Christian god he would have turned George Zimmermann into a giant, fleshy, pulsing, screaming gun by now

How is George Zimmermann even allowed to auction off the gun that killed Trayvon Martin?

“In Florida, if you commit a crime with a gun, you’re going away for a long, long while.” Just ask George Zimmermann.