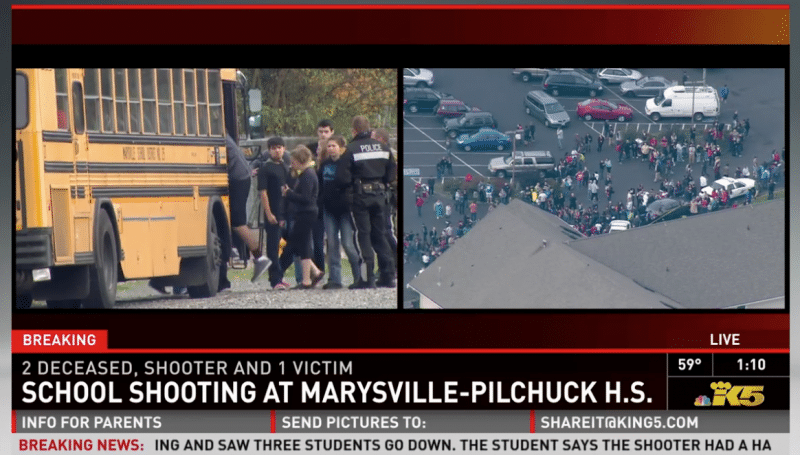 ‘I have the shooter,’ a panicked teacher, Megan Silberberger says in the 911 call. ‘Blood is everywhere. I do not see the gun.’

The shooting came about after the recently nominated homecoming prince took exception to his cousin Andrew Fryberg dating one of the girls in their group whom he had designs on despite being rebuffed by the girl, Zoe Gallasso who came to die immediately after being shot at point blank.

Who would also come to die in the days and weeks ahead of the October 24 shooting included Gia Soriano, Shaylee Chuckulnaskit, both 14, and Andrew Fryberg, 15. Only the shooter’s cousin, Nate Hatch would come to survive after being shot in the jaw and the chest. Incredulously Hatch would forgive Fryberg.

Before passing the phone to Silberberger, a distraught student described the scene to the 911 dispatcher. ‘There’s just been a shooting. Three kids have been shoot… in the cafeteria.’

Recordings of calls from concerned parents and neighbors were also released. From the Seattle Times:

“My daughter just texted me that there are shots fired at her high school,” one crying mother tells a dispatcher. The mother noted her daughter and several other students weren’t following lock-down instructions and had fled from their classroom.

‘What advice can I give to her?’ the mother asks.

During another recording, a neighbor who lives just west of the school reported that she had several students in her home after they fled the school and climbed the fence to her yard. The woman relayed that the students knew the shooter’s identity.

‘First name is Jaylen,’ she said.

Listen to the recording below and make up your own mind.