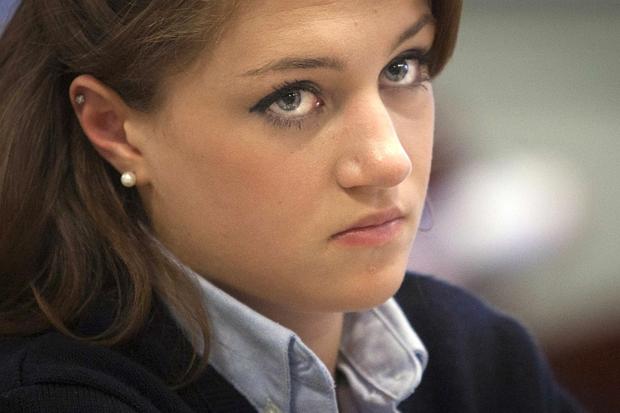 It seems the good shit spilling on our newest collective heroine, Rachel Canning has surpassed a new low as reports stream in as to  the degree of her debauchery.

Since moving to her multimillionaire lawyer caretaker’s house, the ‘spoilt teen’ is said to have been drinking up a storm, all with the abetted accord of her host John Inglesino.

According to court documents obtained by the UK’s dailymail, Rachel Canning has been throwing alcoholic parties all with the expressed approval of her caretaker.

One evening purportedly saw the young woman get so trashed on vodka that neighbors saw her vomiting all over the lawyer’s sidewalk into a garbage can.

But it gets worse, according to the Canning family, the Inglesino’s are purportedly responsible for having introduced the young woman to alcohol during an outing in a limousine for the girl’s 15th birthday.

The sordid claims come on top of a bitter feud between the Canning family and that of the Inglesinos who have been harboring the daughter to the chagrin of her parents, Sean and Elizabeth Canning.

At the urging of John Inglesino, the daughter told the court how her father would try to ply her with alcohol and attempt to kiss her. Submitted court documents also told how the girl’s mother set about calling her daughter ‘fat’ and ‘porky,’ leading to the girl to experience bulimia.

The Cannings have in turn vehemently refuted the claims, instead accusing their daughter’s errant behavior on Inglesino who they claim has enabled her as well as undermined their efforts to discipline her.

Told one court excerpt submitted by the girl’s father: ‘The Inglesino household, according to Rachel in the past, is more lenient. She would often tell us how the Inglesino parents would allow alcoholic parties to be held at their house.

‘Rachel was angry because we would not host an alcoholic party. Rachel’s first time drinking alcohol was at the Inglesino house, in March of 2011 and on other occasions including their daughter’s 15th birthday where they have freely provided alcohol.

‘Rachel came home bragging saying that during the limo ride to NY, Mrs Inglesino gave all the girls wine coolers to drink. This type of behavior we did not condone.’

In another he wrote: ‘Rachel had been playing in numerous AAU basketball tournaments. One March 2011 morning, when Rachel was a freshman, I picked her up for the Inglesino household, after she had stayed the night, only to discover that she was hungover from a night of drinking vodka at the Inglesino home.

‘Upon arrival at the tournament, she threw up on the sidewalk and in a garbage can…’

So far John Inglesino has refused to comment publicly, other than to say he is confident in Rachel’s legal argument.

Commenting on the Inglesino’s continual stance of supporting their daughter’s suit against them, Sean Canning told of John Inglesino:

‘The Inglesino’s, while purporting to help, have actually been a tremendous hindrance in family healing….

‘The fact that she (Rachel) decided to run away and not abide by household rules is of her own volition and enabled by the Inglesino family who have arrogantly stated that their brand of parenting is somehow superior.

‘The fact the Inglesino family has subsidized a lawsuit, rather than providing responsible guidance in abiding by a parent’s ruled is not an acceptable society norm.’

The latest assertions come off the back of Rachel Canning’s boyfriend, Lucas Kitzmiller’s family expressing outrage that their they son encouraged her wayward ways, telling instead Rachel Canning has been instrumental in their son’s recent alcoholic binges.

Rachel Canning is understood to have left home after her parents told her that she had to give up her boyfriend or fend for her own.

The truth may seem that Rachel Canning may have been on a road to emotional disrepair of her own accord only to be noticed at the last minute by the family who have set about blaming others rightly or wrongly for Rachel’s torment. It remains to be seen whether Rachel and her family will re unite as has been advised by Judge Peter Bogaard during Tuesday’s court testimony.