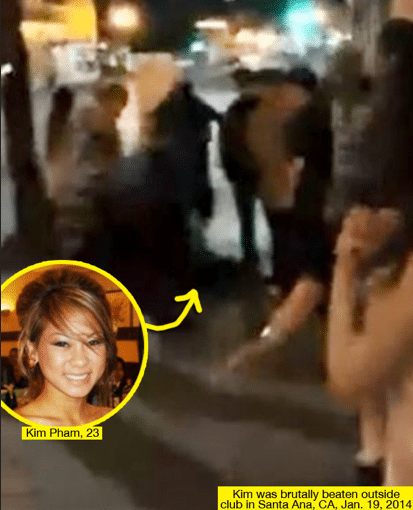 In what is increasingly becoming a vexing investigation for authorities, attempts at bringing Kim Pham‘s murderers to justice has stalled.

To date cops cops tell they have only been able to identify only one of eight friends who were with Pham at the time of her death.

Her ex-boyfriend — who may have tried to help her — hasn’t come forward and the one female friend that police have found won’t talk, tells the Los Angeles Times.

Tells the outlet: Longtime observers of Orange County’s sprawling Vietnamese population say the dynamic doesn’t surprise them in a community where distrust of authority — and reluctance to cooperate with police — still runs through generations. Many arrived in America with fresh memories of the deeply corrupt government back home.

‘People worry that there will be retaliation,’ said Cmdr. Tim Vu, the highest-ranking Vietnamese American in law enforcement in Orange County.

‘They don’t know the court system and are intimidated by it.’

Hardly the most endorsing affirmation of police efforts or for that matter of Kim Pham’s friends to bring her murderers to justice, unless of course they are somehow involved in her death? Then again it could be an issue of deep guilt of not having done anything or enough to temper the melee before it got out of control.

Reiterated Tim Vu: ‘We need to reassure immigrants or potential witnesses that it’s not about them,’

‘It’s about all the evidence and all other witnesses.’

Added Vu: ‘Culture comes into play when they’re heavily influenced by parents or grandparents who cannot forget the distrust,’

Part of the reticence to step forward may also have much to do with witnesses concerns of being dragged into the investigation as a possible suspects.

In fact one woman who has been identified as a witness, Katie, has declined to step forward and has now hired a lawyer to represent her.

Another concern may well be that they may be seen as ratting on friends.

Tells Ken Nguyen a volunteer who acts as a Santa Ana liaison to the local Vietnamese community: ‘Their identities will be protected if they wish,’

‘These are the things we offered the youths, and so far, they are quiet.’

Police tell some in Little Saigon — which stretches across central Orange County — still cling to a “code of silence.”
Went on to tell Nguyen: ‘But this is a crime and a tragedy,’

It remains to be seen whether any witnesses will choose to step forward. Something that says a lot about the faith in authorities and the notion of law and justice.