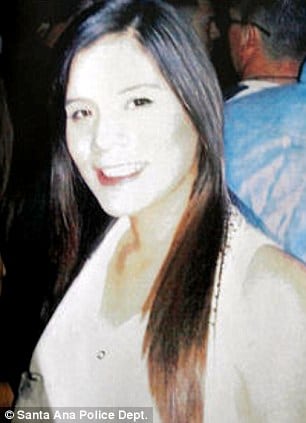 Authorities this evening have released the image of a new suspect wanted in connection with the murder of Kim Pham .

The photo of the ‘person of interest,‘ comes after the arrest of a second unidentified woman, over the brutal attack.

Santa Ana Police Chief Carlos Rojas declined to identify the held suspect, other than to say she was a 27-year-old Santa Ana resident. He did not immediately provide details on her arrest.

The held woman’s defense attorney said his client was knocked to the ground by the crowd and alleges that was the extent of her involvement.

The woman in the above photo according to cops has not been identified and cops are hoping that the dissemination of her image may bring them to her.

Rojas said police have determined that only three women were involved in the attack on Pham, despite earlier reports that five people were being sought.

That said Police Chief Carlos Rojas also said police are hoping to question two men who are considered people of interest in the case.

‘This has been a difficult investigation due to the dynamics of the incident,’ Rojas added.

Mayor Miguel Pulido called the beating ‘an isolated incident’ and said there was no evidence it was  hate crime.

To date cops have charged Vanesa Tapia Zavala with Kim Pham’s murder.The woman now faces the prospect of 15 years to life in prison if found guilty. She remains jailed in lieu of $1 million bail.

Zavala came to be identified through video taken by bystanders at the scene on their cell phones. She had been traced as the owner of a cell phone found at the scene.

Interestingly Zaveta’s phone contained video of the melee, even though she has asserted that she was the one who was struck first by Kim Pham. She has insisted she did not instigate the melee.

A friend who wanted to remain anonymous told the LA Times that Kim Pham accidentally walked into one of the photos being taken by a group of three women and two men.

From there an argument  broke out between the group and Kim Pham and her friends. Pham would eventually go on to be beaten and left unconscious at the sidewalk. She would be determined clinically dead three days later after succumbing to head trauma.

Zavala’s attorney, Kenneth Reed, told reporters after his client’s arraignment that she was knocked down during the melee, and he doubted reports that it was a beat-down.

Told the lawyer: ‘I refuse to believe that people of this community would watch a woman stomped to death by five people and nobody would do anything.’

He went on to add that the violence outside the club was chaotic and involved at least a half-dozen other people.

Went on to reiterate Kenneth Reed: ‘Your day is fine, your life is fine, you have a five-year-old son, you go out one night on a Friday with your boyfriend and then your life is turned upside down and you find out someone is killed,’

‘No matter what the situation is, you’re going to be devastated.’

A second attorney, Michael Molfetta, a criminal defense lawyer who said he’s been contacted by a potential defendant, said ‘there is a lot more to this.’

He told that Zavala had become the scapegoat in the case.

‘Nationally, Ms. Zavala has been vilified and the poor lady that died has basically become a saint,’

‘I’m sure she was a lovely woman and had a great future ahead of her, but Ms. Zavala is a good woman too.’

Of the violence that deteriorated with the loss of Kim Pham’s life.

‘Nobody deserves the fate Pham got. But it was not race related or a photo bombing. It was simply a stupid argument over somebody inadvertently bumping into somebody else that escalated very, very quickly and very, very violently.’

An attorney for another one of the suspects said it was Pham who threw the first punch in what deteriorated into a violent altercation on the sidewalk outside the club.

The fight has drawn national attention as a short video circulated online showing a group of people in nightclub attire wrestling and kicking a figure on the ground in front of a crowd of about 50 people.

In the video, one person is visible crouching to take another cellphone video. A bouncer from the club appears to try to intervene, well after the violence began.

The show of violence has caused many to wonder out aloud why so many bystanders rather than coming to the woman’s aid chose to watch and even egg on the fight on, whilst others chose to videotape it. This whilst a young woman was violently set upon by a gang of people. None of whom even attempted to at least quell the violence.

Which raises the question. What is more savage? The mortal beating Kim Pham received or the throng of bystanders feeding off the violence for their own amusement? Perhaps the release of the image of a new suspect will bring authorities closer to that answer….

The only thing that girl is “devastated” about is her arrest!

Would this story have the same legs if it was reversed and Zavala was the victim and Pham was the accused?

“We don’t see this as a hate crime or anything of that nature,” – of course not, the perpetrator isn’t white.

I tend to believe this was a hate crime, the woman was beaten to death because she was not Latino, but Vietnamese.

I’d like to see life in prison with no chance of parole for the murderers.

My guess is the victim somehow “disrespected” her killers. What a society we live in.