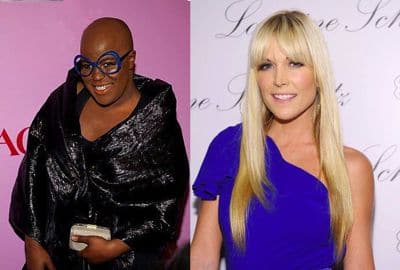 Coming in at number 10 are the joint duo of Malik SO Sick Chic and Tinsley who cares anymore Mortimer. Unable to figure out who was more deserving of this slot I decided to give these two joint ownership (aren’t I a sweet heart?), and why not- they’re both uber obsequious figures in the social landscape and whoring the visual landscape ad hoc- but then again, these two give the term ‘step and repeat’ its vulgar cache and the feeling of an overstayed friend on the living room couch. But at least these two hawt bitches know how to work the room- which is to say, we have a sneaking suspicion these two spend countless hours conniving in front of bathroom mirrors supplicating the perfect pose. Smile bitches, you’re on PMC!

Malik a has been reality whore who’s still deluded by the idea that he is somehow relevant (yes he did get a whole 3 minutes to himself on the doomed debacle High Masturbation Society) , to his credit has been relentless in getting his mug on whatever stage he can hustle. And why not, with a career as a club promoter on the rocks, and a request to intern with Guest of a Guest firmly denied (good on you Rachelle) – this megalomaniac at least has the good fortune of having an iron will and overlooking those of us laughing in our sleep every time he appears in his kimono or whatever in front of some hungry photographer. To his credit, the bitch has slimmed down a few pounds (yes kids- his egg white diet and coco pops sniffle diet is working wonders) and looking more photogenic than ever- but why not- with a handbag line to hustle (Pampered Bitch Royale) Malik innately understands the power of repetition and motion sickness. Our bet- one day he just might make it on your cereal box as Crunchy Cinnamon Freak.

Then there’s our dear Tinsley, who to her credit can strut a delicious swagger down any step and repeat platform as well as the odd fashion show. With her pandora golden locks this breath of sunshine who for at least one season had the kids in Kansas in awe (before they finally gave up in disgust) has become a mainstay on the whore and pimp them photogenic set.

One of my favorite stories about Tinsley involves the time when she made extraneous efforts to get herself noticed by the press who at the time were next door at a funeral house for the recently deceased Heath Ledger.

So enamored was our Tinzer with the allure of a pressman in the neighborhood she hastily ran out of the beauty house where she was getting her manicure to implore the camera boy to take impromptu pictures while the blood drops on Heath were barely drying. But then again, when you’re paying $5000 a month to a publicist (yes kids- you thought it was all free?) to get you in front of all the right camera boys and cardboard boxes- hustling at any moment’s notice will always be the name of the game.

As of late this honey dew ray of sunshine has been somewhat out of the spotlight, commiserating her failure to barely make a blimp south of East 75th st. That said, have courage Tinsley, give old Malik a phone call and the two of you bitches can hustle that step and repeat this coming summer.

PMC scorecard- an uber impressive 3295 results. A publicist who knows how to keep their keep.