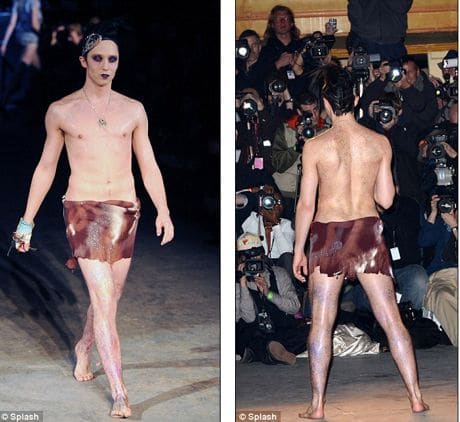 The crowd went on for a block either way this recent Thursday night, waiting to get into Richie Rich’s Autumn/Winter 2011 fashion show “Villionaire”. The event was a disco fevered catwalk held to generate charity for DoSomething.org, a program dedicated to cultivating youth volunteerism, and CookiesforKidsCancer.org, which has a relatively self-explaining title. The fashion that went down the runway was anything but serious though. It was a fun, flighty evening of bold stylistic choices, cute boys, and above all, showmanship. Richie Rich knows how to put on a show and he certainly did just that.

The setting was arena style, with the crowd parted on either side of the runway before a stage.  The emcees for the evening were the three man group The Harlem James Gang, a group of three young men in tight fitted jeans who emerged at the beginning of the evening to a pulsing vaudeville/pop beat, one of them riding in on an old fashioned bike with an enormous front wheel. They served to provide the primary interludes between the different parts of the event, interjecting fun, talky songs that might not have felt out of place on an OutKast album. They did vaudeville shuffles and generally served to jazz up the crowd.

This isn’t to discount the blonde harpist and blonde soprano who opened up the first runway show (actually appearing before the Harlem James Gang did). The harpist set the tone with some beautiful arpeggios for the soprano, who proceeded to regale us with a rather nice rendition of “O Mi Babino Caro” while some awesome looking Gender-fucks did ballet in the aisles. This little bit of classy was the antecedent to the pretty dresses portion of the evening, where Richie Rich got a little Xena on us. While the teased hair, leggings paired with lingerie blouses, and blocky drag queen shoes were definitely of the now, there was definitely a surplus of diaphanous flowing skirts and literal corsets tied up down the back. There was an overt Greek Warrior Goddess feel to the whole thing (paired with the