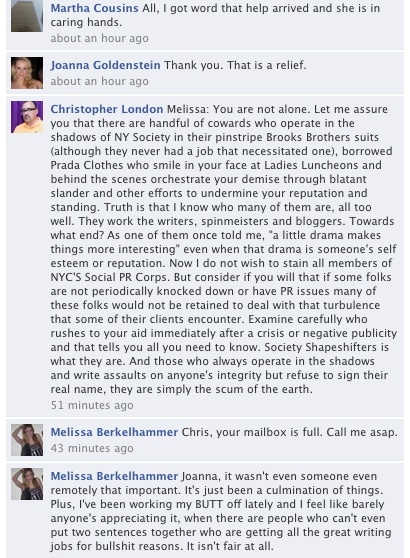 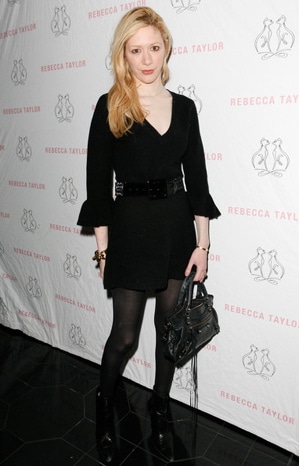 Melissa Berkelhammer. And the myth of the ever elusive socialite continues ….

To be honest we really don’t know much about Melissa Berkelhammer except to say she’s mommy’s kept girl while she trudges the social landscape with her existential angst and the occasional column for whom ever the bell tolls.

In some weird wonderful way, we sympathize with Ms Berkelhammer in so much we understand all about existential angst and the occasional dole out, after all we too are in the business of pain, dilemma and scandal. The scandal in this case being that of Melissa Berkelhammer.

Here are the facts. This past Friday, we came across this long string of facebook dialogue which had us and quite a few of the people responding that today was the day that Melissa was going to pull the plug. Notice the opening sentence to her expressed dementia:

‘I can’t live in a world that is totally against, and I have all of you to thank. Goodbye. Thanks for treating me like shit me whole life. Hope you can live with yourself.’

Who is this brat talking to? Is this a stunt, a self imposed digression into vanity? An honest cry for help, or just a media whore soliciting unbridled attention. A cursory look at the chain of comments as they follow should elucidate a few things for us….

A close up should help us…so let’s all go to page 2 where Melissa and her sword of existential angst and collective woe that is us. Shall we? 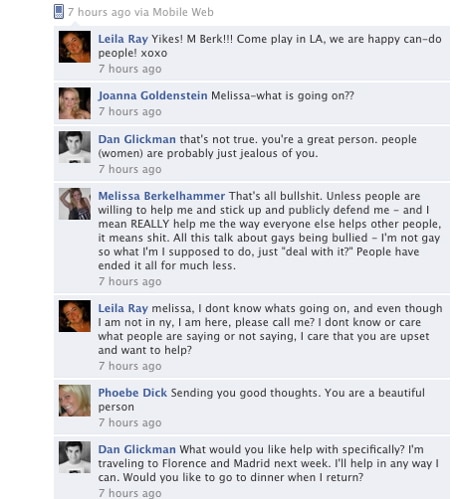 But before we continue trudging along in the minefield called Melissa Berkelhammer, a cursory backdrop story will do us good the way a shot of patron does us good in a sea of unease and new guests to hobnob amongst.

Courtesy of the NY Observer:

Party photographers didn’t always know how to distinguish Melissa Berkelhammer. “I was once identified as a girl named Stephanie Monahan,” Ms. Berkelhammer said the other night. “I first moved back to New York, and I was at the Whitney Art Party, and it was in a magazine called Manhattan Style, which does not exist anymore, and there’s a picture of me with my gold Judith Leiber bag, which I still have, because I think someone asked me to it hold up—Fancy! Hey!—and then they, like, misidentified my name anyway. But then everyone was like, ‘Oh, like, I saw a picture of you—but it’s not you!’ That was, like, my first picture in a magazine.” This was in 2001.

Kids, I don’t know about you, but my heart is violently weeping. Not to be recognized by a photographer in the social minefields is akin to being invited to a pompous dinner party with your seat facing the servants. Not that Melissa keeps servants (well perhaps except for her parents…)

On the hot evening of July 18, Ms. Berkelhammer’s driver dropped her off at Rockefeller Center. She was clad in a What Goes Around Comes Around vintage psychedelic knee-length summer dress—hot pink, lime green, geometric. “My mom has a couple of really cool vintage things, but the majority of stuff she gave away to our housekeeper,” she said.

Housekeeper? We keep ours next to the closet where the chipmunks Fyodor and Mazeltov grovel all day long. That said, let’s get back to Melissa’s ascent to self exasperation and self hate. Shall we?