The below Facebook exchange off Melissa Berkelhammer’s Facebook page arrived by an unnamed source some time just after midnight, purportedly a few minutes after the fallen socialite took to Facebook where she both implored her Facebook friends to ‘donate’ $65 000 or face homelessness whilst at the same time castigating said friends for having been responsible for causing her self demise.

Which is a rather odd but dare we wonder passive aggressive method of reaching out to one’s social media connections to save one’s hide in times of extreme turmoil and disarray.

The newest Facebook rant (and it is a rant as you will soon read for yourselves) comes after the fallen socialite ( I won’t bother calling Melissa an aspiring socialite anymore…) took to Facebook last week where she pleaded for a second chance in life, principally a new daddy and a husband to take her away from her misery and self destruction.

The latest Facebook diatribe and there have been others, including one back in 2010 where the fallen socialite had taken to Facebook to announce her imminent suicide, where at the time Melissa blamed her followers for throwing her under the bus (something she does once again in her latest rant) once again implores readers to understand her situation and to come clean with their part in backstabbing her and leaving her adrift in the murky waters of tabloid land where Melissa has become a regular attendant.

Yes being famous (or is it notorious?) does have its moments.

One gets to appear in pagesix the nydailynews, the dailymail, and even people magazine where lawyer Mark Heller (who himself has a notorious past) evinced that he had great hope for his newest client and that life had just been a great misunderstanding and a circumstance of sleep deprivation or something like that.

Offered the lawyer: ‘She became a social pariah in society where she was once held in high regard,’

‘The same girls that were very much attentive to her suddenly turned their backs to her.’

Adding of her misadventures at Bergdorf Goodman which saw the fallen socialite accused of stealing $4k worth of goodies:

‘She was not intending to steal anything.’

In her newest facebook rant below, Melissa Berkelhammer beseeches the following:

Need 65K now for an apt I found. Have to be out by the 26th at the latest in order to move in time I need it now. You all knw what I’m going through and may I say many of you caused it.

Raise your hands kids if you know you’re guilty and are culpable for Melissa’s downdraft slide in the social aspirations stakes and self implosion. Yes I see some raised hands in the back of the room too….

Continues the fallen socialite, and watch how she mends your generous heart:

This is just one example of my bad luck: not only do I get him and mangled by a car but I can’t even get a settlement because the pig who nearly killed me didn’t have damn insurance. And thats merely the tip of the iceberg. Only to me could this many bad things happen. This is a mere pittance for 99 percent of you- I see all your #blessed instagrams – and it literally means life or death for us. And don’t say just ‘get a job’ bc with all the google crap I’ve had for 10 years that’s been impossible. And that’s all may I say courtesy of many of you who were so mean and catty to me and threw me under the bus to the press. Even for one of you this would be a drop in the bucket but certainly a group of you this is nothing.

Kids, I must be traveling in the wrong circles. $65K hand out just because we’re Facebook friends and I know/hope you’re loaded? Not $650, not even $6500 but $65 000 because that is at least the justifiable amount to compensate Melissa’s misery. C’mon surely one of you can afford it? After all you did throw Melissa under the bus….

From there Melissa reasons the world will not be happy until she is dead (notice a recurring theme here kids?) as well as pointing out to us, lest we have forgotten (yes Melissa made it on people magazine last week) ‘this is

a national tragedy of epic proportions.’

Brief pause. Look up at the sky and wonder where all the promised angels are?

Look up at the sky and wonder how did one independent woman who had every privilege and access and ivy league education bestowed upon her suddenly self implode? Or maybe life or fate just adversely intervened?

Yes kids, even socialites and the well to do amongst us sometimes get the raw end of the stick.

Implores Melissa once again: ‘My life was so full of promise and you all know it. What was the point of any of it?’

Adding: ‘If only one of my relatives or close friends had the decency to help me privately I wouldn’t have to deal with this.’

Which of course begs the very awkward question where have all of Melissa’s well to do relatives and close friends all disappeared to?

Above image courtesy of gog, 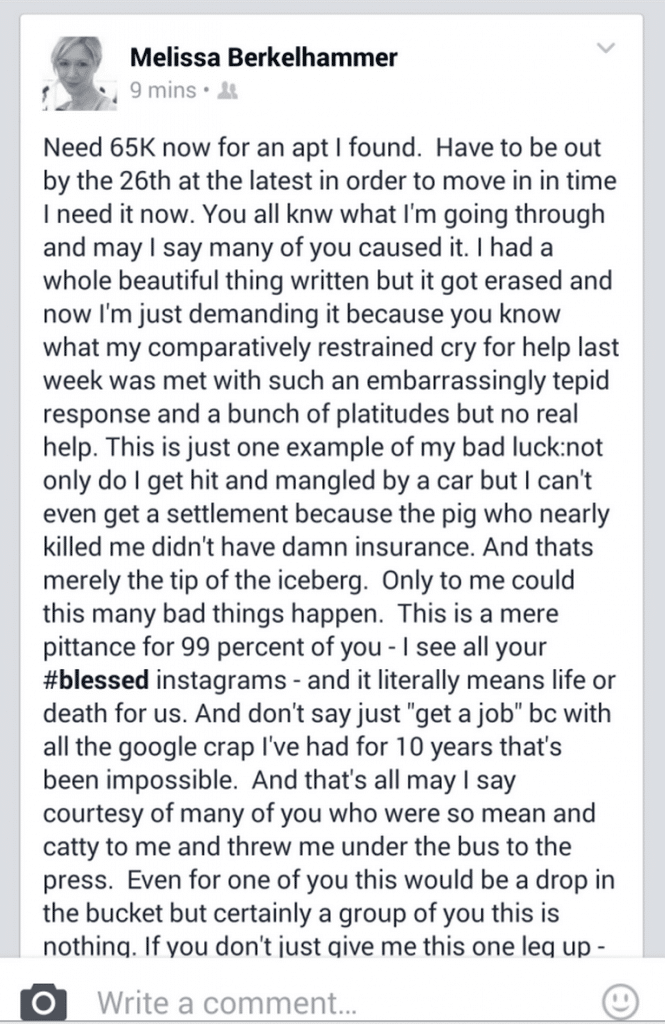 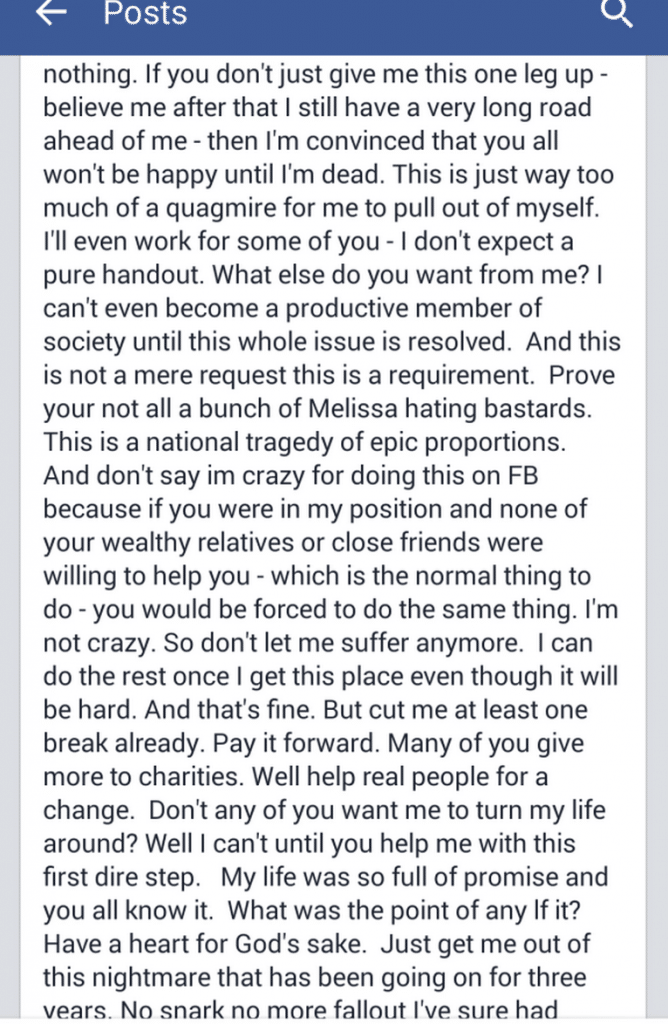 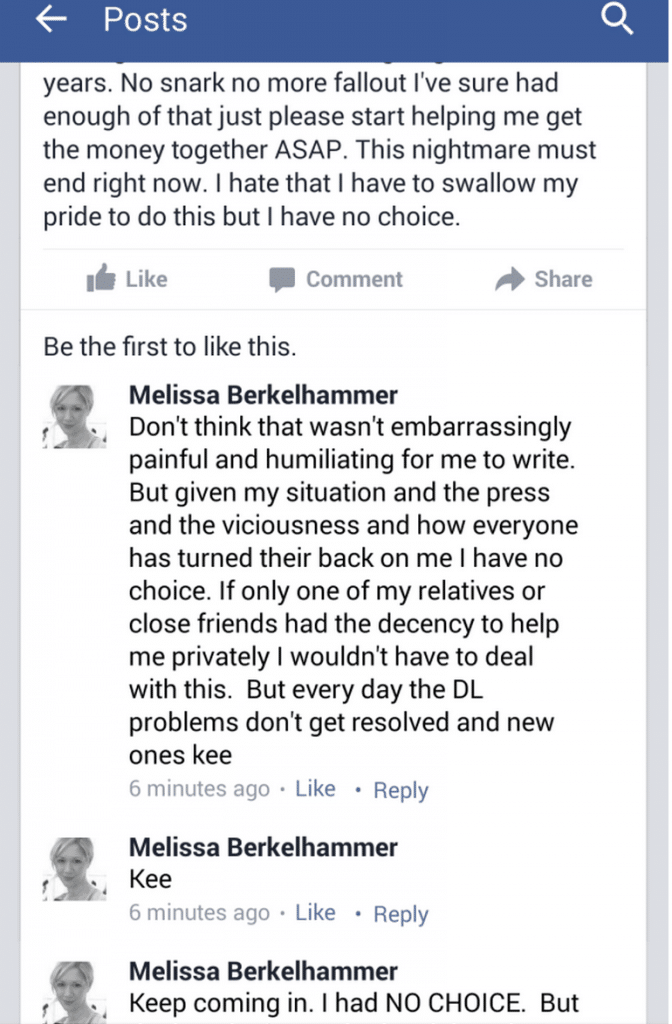 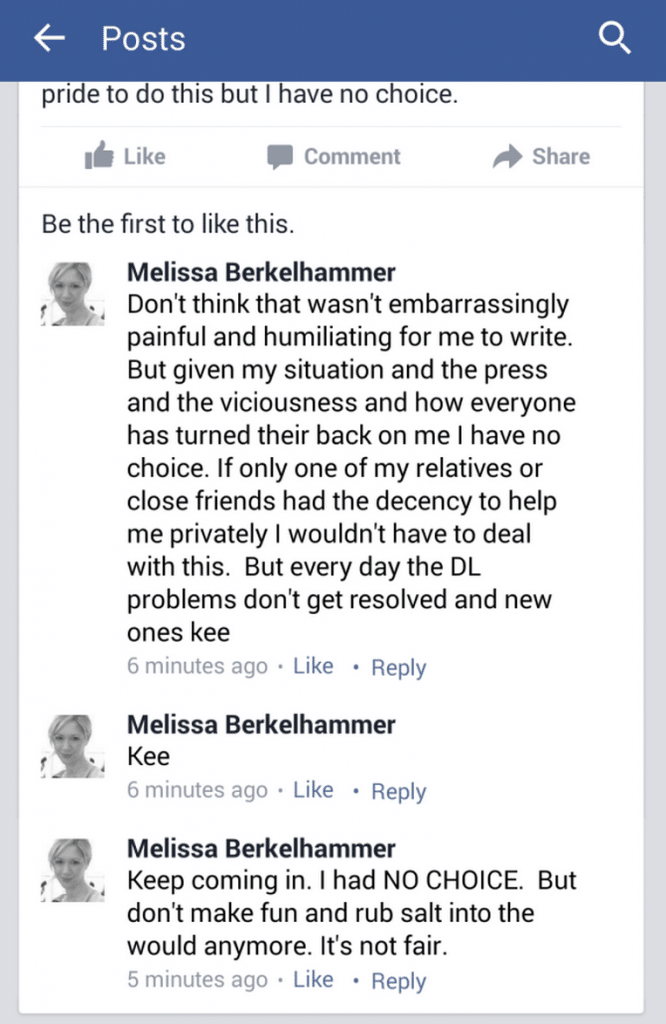 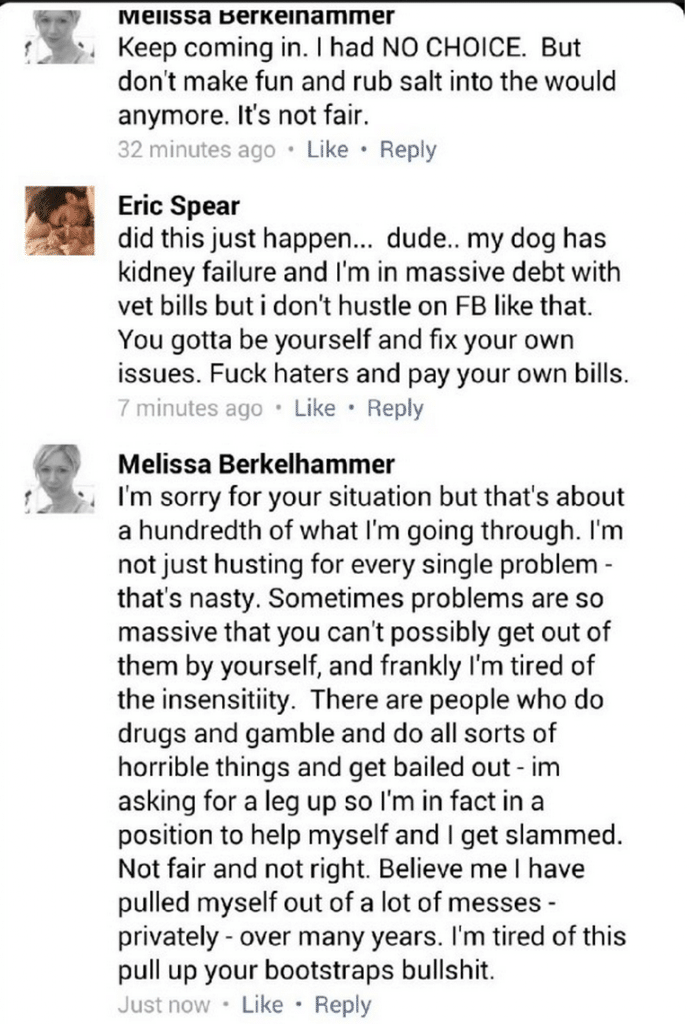