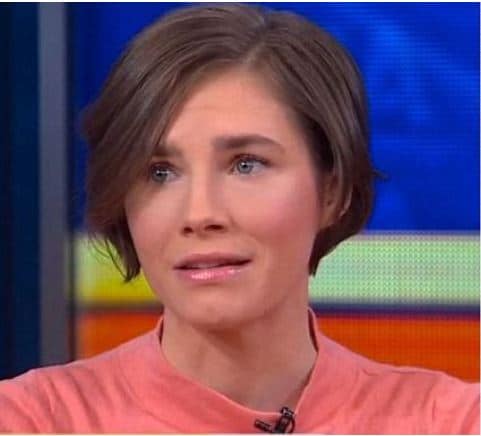 ‘I will never willingly go back. I will fight this to the end.’ These were the heart felt words that Amanda Knox‘ left with viewers on her Good Morning America interview on Friday but according to a former prison guard that is all a front.

Told Angela Antonietti, a favorite guard of Knox’s at Capanne prison, near Perugia: ‘She is a brilliant access and a secret Ice Maiden who has reinvented herself as a warm compassionate human being.’

The startling telling comes off the back of Italian courts convicting Foxy Knoxy (as she has been labelled given her ingenue appeal) for a second time of killing British student Meredith Kercher in 2007.

Since her latest conviction, Knox has sought (with the gleeful cooperation of most major media outlets) to position herself as a compassionate misunderstood boldly innocent who has been unjustly vilified by the ‘evil’ Italians.

That though according to Angela Antonietti her former prison guard (during her 4 years of incarceration, from 2007-11) could be nothing further from the truth.

Instead the former prison guard has labelled Amanda Knox’s show of contrition, concern, tears and pleas for the Kercher family to let bygones be bygones and get on with life (itself remarkable and lacking in remorse) nothing more than an act. Telling instead that Knox ‘never, ever’ talked of her ‘friend’ Meredith Kercher.

Telling the Daily Mirror: ‘Underneath the veneers she remains the same controlled woman I knew well in Capanne prison. She was so composed, I never saw her suffering.

‘She now presents herself to the world as an image of compassion, and thoughtfulness, with a carefully presented look that changes when she wants to look serious. Or glamorous She’s a brilliant actress.’

Angela Antonietti, who worked as a prison warden for 25 years, said she came to dislike Amanda Knox immensely during her time at the prison, and told of how she would sing and dance around her cell during the day, and ‘sleep like a baby’ at night.

She said the only emotion Knox, then 22, ever showed was when she was waiting for her mother to send her the second Harry Potter book.

She added: ‘Her behaviour wasn’t human. Even the doctor didn’t understand her.’

Preceding the court’s judgement this Thurday, Amanda Knox had in the weeks ahead embarked on a complete image overhaul. Gone was the long flowing mane, the glamorous dress sense and steely stares and in was the the new short pensive bob haircut and homely tidy appearance with accompanying doe eyes.

At one point, Good Morning America’s Robin Roberts even took to holding Amanda Knox’s hand and proceeded to plug her book, telling readers ought to learn more about Amanda Knox. The poorest and vulgar form of television journalism one could hope for and receive. So much for unbiased media coverage. Then again this is entertainment reporting….

Yet this may be what Amanda Knox may have hoped for as she skillfully positions herself in the public’s good graces knowing full well that her only chance of avoiding having to return to Italy would be installing the public’s good will with her and thus forcing the US State and Justice Department‘s hand who will ultimately decide if she ought to be extradited back to Italy should the Italians ask it.

Told Amanda Knox during her exclusive with Good Morning America:

‘There are people who know better than I do the way these systems work and the way there was this entirely preventable thing that happened.

‘People needed to try to understand that when you have overzealous prosecutors and a biased investigation and course of interrogation that these things happen. And I’m not crazy.’

And that may belie the point. Is Amanda Knox really crazy? Did she take part in Meredith Kercher’s hideous death and if so could one argue that in essence that Knox is crazy and as demented as some are coming out and suggesting in lieu of her ‘narcissitc stance.’ ?

Told Knox on Thursday night after the Italian court’s decision:  ‘It hit me like a train’, adding: ‘I couldn’t believe what I was hearing.

‘I really expected so much better from the Italian justice system.’

Yet since when did private citizens ever feel the need to issue a public statement with respect to their private affairs unless they felt they were beyond the reckoning of anonymity and eager to assuage public opinion of her?

Although she played the helpless and isolated victim, Knox is in fact surrounded by a team of image handlers who timed the chat – along with similarly sympathetic interviews with the Guardian and BBC Newsnight – for maximum effect.

Her camp knows Britain could play a crucial role if it decides to push for extradition on behalf of the Kercher family.