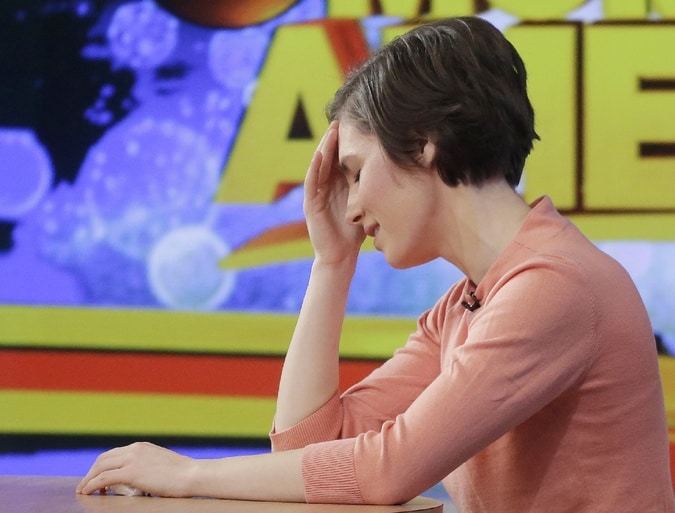 The public relations fight is on and it was in full force this morning as Amanda Knox took to Good Morning America where ABC’s Robin Roberts   interviewed the discernibly frazzled Amanda Knox.

Told Amanda Knox to anchor Robin Roberts: ‘I will never go willingly back to the place where… I’m going to fight this to the very end. It’s not right and it’s not fair.’

Pausing to let us all feel her angst, the ingenue continued:

‘I need a lot of help. I can’t do this on my own and I can’t help people understand this on my own. There are people who know better than I do the way these systems work, and the way that there was this entirely preventable thing that happened that was systematic. ‘

Before adamantly telling, because Knox can command whole nations:

‘I will never go willingly back to the place where I — I’m gonna fight this until the very end.’

As it stands, Knox and her then lover, Raffaele Sollecito were both released from custody in 2011 after a court ruled that their 2009 conviction could not stand.

The acquittal, however, was overturned in 2013 and a new trial ordered, but by then Knox had already returned to the State. Yesterday, the court decided to reverse their acquittal, finding Knox and Sollecito guilty again and re-sentencing her to an additional 28.5 years in jail, and him to another 25.

Interestingly Sollecito was found in Italy near the Austrian border, where officials confiscated his passport so that he remains in the country throughout the appeals process.

Pursuant to yesterday’s judgement, Amanda Knox took it upon herself to issued a public statement in reaction to the news. Something that ought to strike us all odd given that the young woman is not a government official, a celebrity but a private citizen. But then again even Amanda Knox has come to understand the benefits of a tacit public relations campaign.

Told the statement: ‘I am frightened and saddened by this unjust verdict. Having been found innocent before, I expected better from the Italian justice system. The evidence and accusatory theory do not justify a verdict of guilt beyond a reasonable doubt. Rather, nothing has changed. There has always been a marked lack of evidence. My family and I have suffered greatly from this wrongful persecution.

Where to now? It will probably be another year before a final result is understood as Knox and Sollecito’s defense team appeal the verdict where one can expect a fair degree of jawboning from both the prosecution team and the defense team who has to its benefit the majority of the American media and public firmly behind it (for now).

If the appeal is dismissed, Knox could be extradited to Italy, likely setting another long and protracted legal fight between the two countries. The U.S. could deny the request on the grounds that American law does not allow defendants to face “double jeopardy.”

That said the question is how will the US handle things and what back door deal will it do to save itself from humiliation given the mounting public relations pressure ‘to protect’ Knox from the ‘evil’ Italians never mind its very own failure to follow and respect the law of other nations, double jeopardy or not  as it demands others must or it….

Yet in the end the US government may end up being spared having to deal with its moral culpability and obligation to follow international treaties as the public and the majority of the media steadily lobby for the too hot to go to jail Foxy Knoxy.