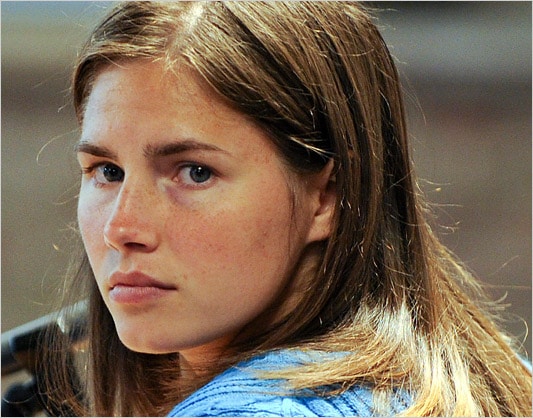 usatoday: MILAN (AP) – Italian prosecutors appealed Tuesday to Italy’s highest criminal court against the overturning of the murder convictions of American Amanda Knox and her former boyfriend in the brutal slaying of a British student.

Perugia prosecutors filed the 111-page appeal more than four months after an appeals court in Perugia threw out the convictions against Knox, 24, and Raffaele Sollecito, 27.

The appeal, which was expected, marks the third and final stage in the criminal case against Knox and Sollecito for the Nov. 1, 2007 stabbing death of Meredith Kercher, a 21-year-old British student studying in the hilltop town of Perugia.

Italy’s high court it is said will most likely make a decision towards the end of the year as to whether it will re convene for trial again.

huffpo: Prosecutors Giovanni Galati said he is “very convinced” that Sollecito and Knox are responsible for the Nov. 1, 2007, stabbing death of Meredith Kercher, a 21-year-old British student who shared an apartment with Knox in the university town of Perugia.

Galati told reporters in Pergugia that the appeals sentence must be thrown out, saying it was full of “ommissions and many errors,” the news agency ANSA reported.

And then this astute comment from a huffpo reader:

This could get interestin­g. If the high court overturns the appeal and orders either a new trial, or reinstates the conviction­, a request for extraditio­n will need to be filed. Based on everything that has been published about the evidence, will a US court agree that there is sufficient evidence to warrant the extraditio­n? I am sure US attorneys as well as Italian attorneys are starting to add up their bills.

Time will tell what will become of this case (it will most almost certainly now push the bidding war for the Amanda Knox book deal beyond the purported million dollars sitting on the table) but what does appear obvious is that the prosecution remains flummoxed by their inability to get what they perceived to be an open and shut case against Amanda Knox and  Raffaele Sollecito much perhaps the same way so many feel about Casey Anthony here in the United States. Unlike the States though it looks like the Italians are getting a third chance to move the goal posts a little closer in the hopes of scoring a conviction, which can only make one wonder if this was an open and shut case in the first place wouldn’t prosecutors have already gotten what they insist is theirs- convictions against two heartless killers?