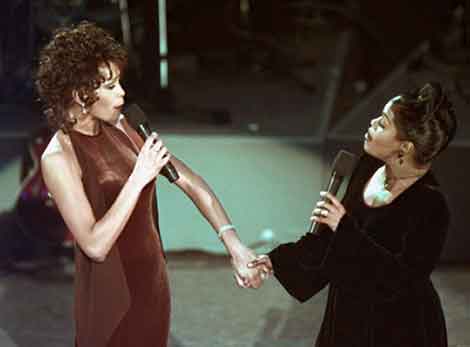 Adding to the drama that our collective heroine Whitney Houston was a tormented soul (as well as a tortured wife courtesy of her husband, etc, etc)  is the revelation courtesy of the dailymail(yes I’m also surprised too) that Whitney Houston may have been a closet lesbian, the angst of which led to her spiraling use of drugs. Hmm…

dailymail.co.uk: Whitney Houston was a secret lesbian and binged on the drugs and alcohol that killed her because she was torn over living a lie, it has been claimed.

Rumours have been circulating for 30 years that the singer had had a secret relationship with her ex-assistant, but her friends have now publicly spoken about her sexuality following her death.

Gay rights activist Peter Tatchell even said her marriage to Bobby Brown was a smokescreen.

A smokescreen that one has to admit was very well orchestrated. Or are the propping of sudden rumors the media’s attempt to propagate the myth of a tortured soul who ultimately had no way to deal with the horrid existence of being a ‘lesbian’ but by escape at any price possible? But then again why is the media going out of its way to raise questions of the singer’s sexuality and what are we implicitly suggesting about those who do happen to be gay?

Reflect a corterie of dailymail readers:

This was common knowledge in the gay community two decades ago apparently, why the big deal now? Having a gay brother who’s a mover in the scene, you get to hear all the stars who conceal their true religion. It’s a damning indictment of public prejudice that so many have to keep it a secret as they know it will affect their movie/record/ticket sales.

This just seems like going over old ground!!! Those “Lesbian” rumors about Whitney have been going around since the 80’s.it just seems pointless now to be going over things like this.I doubt very much if she was gay it would have been the reason for her drug abuse, I bet the reason for her problems was just like that of Michael Jackson,Marilyn Monroe,Amy Winehouse etc…and that reason is too much to soon and never ending press attention.

What tosh! Would her family or management “force” Whitney to marry a man like Bobby Brown who had a dreadful reputation! Hilarious. If she wanted to hide her “real” sexual orientation, she could have found a more suitable man! Personally, I could care less about her sex life but I know in America it is a very different story. Many an actor has found the work dried up when they “came out!”!!! Regarding Whitney’s comments about “her end was near” rubbish. Well SHE had the control of that situation, everyone tried to help her, she went repeatedly into rehab with the support of her management etc. Everyone tried to help her but she was not willing to give up her drug addiction. Other people like Elton John managed to get off drugs, Whitney could have done the same.

But this is the one I liked best:

I’m not a fan of Whitney Houston, but it seems wrong that now she’s dead and so can’t defend herself in the libel courts rumours and newspaper articles are coming up. At least people waited a couple of months before making allegations about Jimmy Savile, Whitney isn’t even cold and already the allegations are being made. So what if she was a lesbian? It’s perfectly legal and no-one seems to think any less of women who are lesbians, so what’s the fuss about? She was a singer, and quite a good one, though not of a style that appealed to my musical tastes, so who cares whether she had lesbian tendencies?

Indeed what is the fuss? What is it about this woman who has ruptured a splinter in the nation’s consciousness? She’d been drug addled for years- that was never a secret. She’d been unhappily married for years, also not a secret. She was also as many would argue dead for years as well, no longer entrancing us of the youth and vigor that once eviscerated us, nothing more than a ghost skeletal of her grandness who ultimately became a slow train wreck to hell. And yet the media has come to resurrect her, re manufacture her and re brand her- all nice things when you happen to own the rights to all the music she made never mind studios are racing to pre release the movie she made before her death before its original summer release to of course take advantage of her sudden rise in popularity.

In other words, it’s just another day at the hands of big media and the products that they hope to push down your throat and the dollar bill they hope to seduce you out of. Really, did it ever matter if Whitney Houston was a lesbian or anything else that may have momentarily caused Hollywood or for that matter you to jeer? In fact why should the singer’s sexuality even have been a question? The proof is in the vast bank roll suddenly re jiggered. Clive Davis must be one happy bixch.