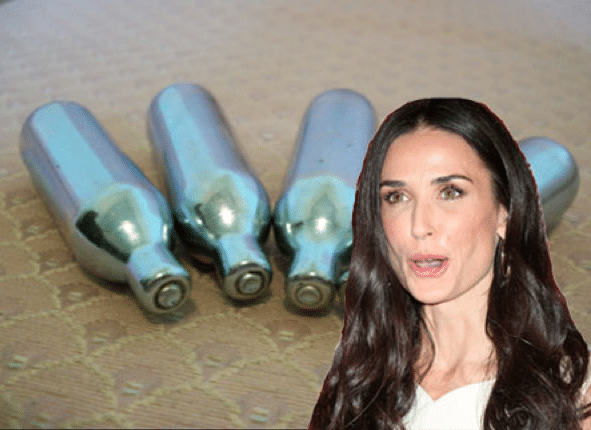 Instead of keeling over a white smeared toilet seat it turns out our collective hero Demi Moore spun onto the floor in a convulsion which led her to ass then going into a semi coma. These are the episodes of the rich and famous you have always wanted to see on your tv set but courtesy of Demi can now actually read about.

tmz: Sources tell TMZ … one of Demi’s friends who was at her home told emergency workers Demi was doing whip-its. A whip-it is a street name for a type of nitrous oxide inhalant.

The friend said she became upset when Demi had a reaction to a whip-it and lapsed into semi-consciousness.

It appears Demi had symptoms of a seizure — after inhaling the nitrous.

A whip-it is not a common drug among people of Demi’s age and social status. It’s typically used by younger people who are looking for a cheap thrill.

Cheap thrill? What dating and marrying a 19 year old isn’t a cheap thrill? Hanging out with matching outfit with your daughters at the school prom isn’t a cheap thrill? And I guess re tweeting images of your goose feather spandex behind in a hardly made to be seen bikini to the universe doesn’t count as cheap thrills either? And don’t get me started about pole dancing in a gold lacquered string bikiniwhilst the janitor is taking photos to send back to his sexually deprived off spring. Excuse me! This bixch was born with a postcard hanging out of her tongue that said ‘ I only intend to live a life of cheap thrills!’

And what’s this part about social status? What did you really expect Demi to start sucking on a crack pipe? She leaves that shit for Charlie Sheen cause at least he knows that’s at the end of the totem pole for self abuse and mutilation. Demi of course has a touch more pride and common sense.

Whilst boardroom executives are rolling up thousand dollar bills and sucking in the white nectar (that’s coke, blow, yah for all your ignorant bixches) and housewives are wallowing in prescribed opiates and all that other shit you can get from your doctor if you beg him, Demi is hanging out with 14 year old boys (yeah bixch!) inhaling canned bottles full of nitrous oxide. Mark my words kids, next time you walk by a seven eleven there will be a whole bunch of you conking on the side of the road? Why? Cause that bixch made o’ding on nitrous oxide popular again.

Don’t you wish you were an insanely rich and famous hawt bixch wallowing in self pity resorting to midnight novelties to dull the pain too? Unless of course you already are….

Demi Moore rushed to hospital after snorting too much of the good stuff.