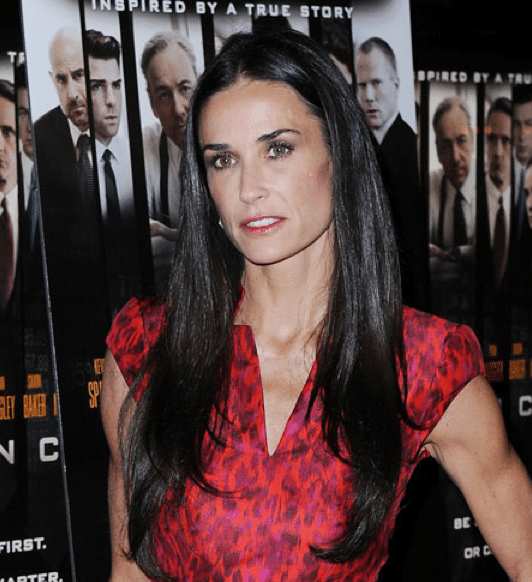 Demi Moore isn’t having a good start to the year, never mind her publicist puts it all down to ‘exhaustion.’

Oh dear it seems our hero, Demi Moore has been taking the loss of her hawt bixch, Ashton I will bang whom and when I want outside of our open relationship handshake Kutcher  to heart as reports have started to trickle in that last night was not a particularly good night….

TMZ:  Demi Moore was rushed to the hospital last night … and we’re told the issue is substance abuse.

Law enforcement tells us a 911 call was placed at 10:45 PM Monday night.  Paramedics responded to Demi’s L.A. home and after assessing her for a half hour, she was transported to a local hospital.

Assessing her? Is that a code word for wiping the good shit off her sleeve? For letting her finish the last gimlet highball before the IV fluid took its place? Or is that simply Demi breaking out one more eight ball in the closet whilst looking for her handbag before making her dramatic admittance to the ‘I fuxked up big tonight casualty ward.’

Then there’s this weird obtuse reference to ‘seeking further professional assistance.’ But of course since it’s never polite to let the plates smash too loudly in polite society, Demi’s professional (yep, there’s that word again kids) help end with this even more obtuse comment:

Demi’s rep tells TMZ, “Because of the stresses in her life right now, Demi has chosen to seek professional assistance to treat her exhaustion and improve her overall health.  She looks forward to getting well and is grateful for the support of her family and friends.”

To treat her exhaustion? Or to treat a fascination for coco snort curls?

But then again why all the fuss? Demi is a grown woman who knows the value of a hawt bixch hanging off the side of her lapel, of a an all you can get body liposuction with additional bikini wax on the house  and of course the joys of a heart ache which she was trying in her own desperate quiet way to get through before it clogged up her nose. Never mind, there’s always another eight ball after the ‘exhaustion’ therapy runs its course.

Don’t you wish you were a demoralized media whore having to save face…unless of course you already are.