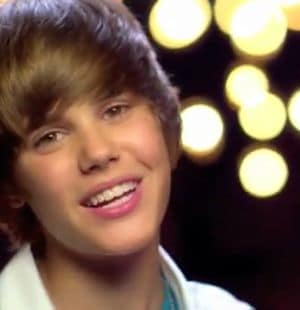 Justin Bieber was at Macy’s today in Herald Square yesterday promoting his new fragrance (as all stars do) when he was suddenly knocked down.  What exactly happened is hard to say.

ABC News: The NYPD also does not believe Bieber was rushed by a fan. Instead, that person may have been a plainclothes officer trying to help.

Witnesses said when Justin Bieber came out the doors an unidentified man jumped a barrier and knocked the teen sensation to the ground.

Bieber’s team says the teen was never knocked to the ground but appeared to be very ‘shaken up’.

Other witnesses say Bieber was swinging back at the man.

Swinging? Really- did our Biebs have any other choice? After all he’s a hero to every 15 year old in greater North America and one imagines in his own imagination too. Right?

Then you have the following reaction from one fan, pursuant to the above youtube video being posted. Kind of makes you wonder what the word ‘fan’ really means.

i waited 9 hours in the Rain for 4 seconds Of His Amazing Face. 🙂

But not everyone reveres their matinee idols: Take this tweet courtesy of disgraced (of course that’s our opinion, you on the other hand probably adore this sly bitch) Lindsay Lohan: 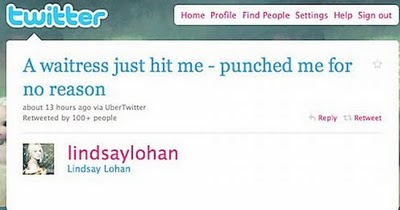 All of which has got us wondering why is it that we always knock down our mass idols? Is there something perverse in human nature which compels us to destroy what is “sacred?” In any event at least our Biebs had his fists up to fight back them demons. So cute…

AND THEY CALLED THIS SH*T PUPPY LOVE. JUSTIN AND SELENA BARE ALL.

SELENA GOMEZ- PUNCHED IN THE FACE OR DRENCH KISSED BY JUSTIN BIEBER?

JUSTIN BIEBER GETS A NEW HAIRCUT. THE END OF AN ERA?

WOULD YOU STILL SWOON FOR JUSTIN BIEBER IF HE WENT BALD?

YOUR HERO JUSTIN BIEBER’S TWICE A MONTH HAIRCUTS COST $750 EACH.

JUST IN CASE YOU WERE WONDERING THERE IS NOW ONE MORE JUSTIN BIEBER LOOK ALIKE.

JUSIN BIEBER POSES WITH HIS SHIRT OFF.

JUSTIN BIEBER UNDER INVESTIGATION FOR ASSAULTING A 12-YEAR-OLD

DOES JUSTIN BIEBER REALLY HAVE ‘RACKS OF TWITTER SERVERS DEDICATED TO HIM?’