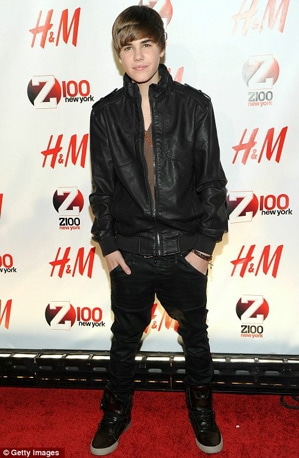 With Kim Kardashian safely on restraining order, rumors have been circulating that Justin Bieber has been dating two, count ’em two, Disney tween idols Jasmine Villegas and Selena Gomez  after the latter was spotted at the International House of Pancakes with the (alright, I’ll write it) pint-sized pop-singer. Sources say the fledgling power couple held hands and got even got a little ‘cuddly,’ going so far as (hide the kids) sitting on the same side of the booth… at least the second sign of the coming popocalypse.

Defending her presence at the pancake breakfast from surely rabid female competitors (also coincidentally her fans) Gomez  who sources say has been ‘gushing’ about Justin and calling him her boyfriend  coyly stated:

“It was pancakes. Who doesn’t like pancakes?” “We were both performing in the same place so we went and had pancakes together. That’s all it is. All innocent.”

Performing the necessary damage control in an attempt to save one of its brightest upcoming prospects, MTV has since reported that Gomez, 18, considers the 16-year-old Bieber as more of a brother than a lover, saying she considers herself to be, incest jokes aside, something like his big sister.

Meanwhile, Bieber has recently admitted, to none other than Barbara Walters, that he’s guilty of kissing the other older woman, 17-year-old Jasmine Villegas two months ago in the back seat of a sedan (guess he wasn’t old enough for the driver’s seat). Of the episode, he stated, Well, I was just … I don’t know, I was just kissing her. That’s about it.” And it has to be, because Bieber, like no other teenager before him, needs to be inordinately careful, as he’s got himself into quite the odd predicament…

Though the Biebs could quite literally have his pick of any teenage girl (and we are assuming older fame hungry starlets), as the Daily Mail accurately noted of the Gomez-Villegas situation: News of either hook-up will devastate millions of teenage girls around the world who have succumbed to Bieber fever. I should like to point out, as somewhat of a digression, that this is the type of language typically reserved for speaking about the effects of nuclear weapons. Surely that’s on some level a facetious accusation, but few other metaphors can accurately depict the profound, and likely destructive, effect that Bieber’s first confirmed girlfriend will have on an entire generation…. we need only remember the hatefest that ensued after Sydney Dalton posted a video of Bieber’s image being shredded on YouTube.

Bieber, himself, has hinted that he fully understands the explosive nature of the circumstances at hand, saying “I mean, girlfriends are trouble at this age.” Especially, we could say, if your livelihood depends upon your being single.

We could, then, well wonder the following question: How will, or better, how can Bieber ever lose his virginity when he needs to maintain the illusion that he’s totally attainable and always reachable (at least by Twitter), when his whole star is predicated on the fantasy that each and every single one of his fans have been predestined to be the first and only girl to love him?

Which is perhaps a roundabout way of asking: will the world really be able to go on, after the news of Bieber’s first reported sexual experience results in what amounts to a worldwide nuclear explosion of teenage angst and emotion?

Justin Bieber Under Investigation for Assaulting a 12-Year-Old

Does Justin Bieber Really Have ‘Racks of Twitter Servers Dedicated to Him?’