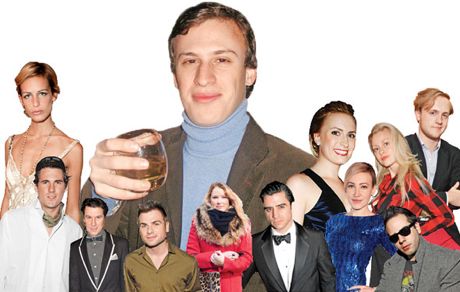 Kids the teardrops are backed up all the way to the back of my spleen and there’s only person I hold responsible for this- Oliver Estreich– the apparent new commissar of tragic posh, society, diamond platinum tear drops and a good drop of velvet moonshine. Cause you know when the NY Trash Post (aka Page 6) does a feature on you, you know you must be on a good thing or are you?

pagesixmag: Oliver Estreich is almost too easy a target. As the founder of the Native Society, a new social network for the city’s young, privileged and preppy, he just begs to be mocked. He’s 24 and wears cuff links. He owns his own tuxedo. He threw his group’s inaugural event in November at the Plaza because, he says, it was “nostalgic” for members who’d spent so much time there as children.

Nostalgic? What’s nostalgic, rocking up in dad’s tuxedo and high fiving all the other prepubescent brats you went to ‘prive school’ with. Yes- I must admit that is a darling feat, and prey who does all the dry cleaning? Not Oliver we hope?

Since Oliver had so much free time on his hands and a good bottle of moonshine tucked in the cupboard he decided to have a think to himself and come up with a snot snob club that half of the Upper East Side under 22 establishment could join- aka the Native Society. And kids- guess what- the darling succeeded- it’s says here on the doormat- ‘please wipe your feet carefully before you enter our noble abode!’ Dear Oliver, I have taken to wearing a pair of shoes with no holes in them today, surely that is a good sign? What time must I arrive so we can all drink snort the collective moonshine?

Estreich says the idea for his organi­zation was organic: His friends kept saying to him, “How is so-and-so? I haven’t seen him around for a while; I wish I ran into him more often.” Estreich, a self-proclaimed “social butterfly” even back in his Browning School days (that’s a private school on the Upper East Side that costs about $35,000 a year to attend), caught a whiff of opportunity.

Organic? Does that mean daddy gave you a never pay me back loan to run social butterfly sessions? Oliver, I am thrilled, I too once came across $35 ooo, but the damn credit company keeps insisting I give it back to them. What to do? Should I just mention your name at the door, that’ll probably help, unless of course it doesn’t dear…

Instead of simply throwing a party or forming a new social organization like, say, the Union League Club for Kids, Estreich went the Zuckerberg route. He enlisted a group of “administrators”—a.k.a. his best friends—and built a free, password-protected online social network called theNativeSociety.com, where members could interact safe from the prying eyes of the hoi polloi.

So yummy Oliver! And who exactly did you nominate to be your door bitch? I can think of a thousand souls who must have thrown themselves at you- “Please Oliver- let me be your door bitch!!’ Just a few names that come of the tip of my wobbly head- Tyler Burrow ( you know he used to be a male model just like you),Kristian Laliberte (cause I heard he’s on the straight and narrow finally these days) or what about Zev Eisenberg– he’s that hawt bitch that used to date that gallery dealer before getting dumped for some rich dude like you. Never mind.

Now, a handpicked group of New York’s wealthiest sons and daughters, including Peter Davis and Anne de la Mothe Karoubi, can flirt, chat and talk business privately. But such is his reach that in just four months Estreich has attracted almost 400 members—400 posh, young, beau­tiful members.