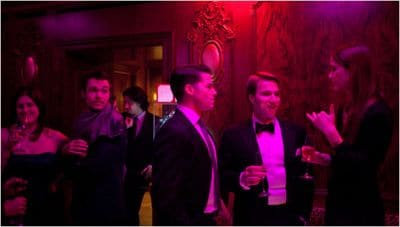 “In New York City,” she explains, “you grow up a lot faster than other places. You go to formals and deb balls; there’s always been this idea that we like to be out and experience the city as adults, even when we’re kids. The Native Society was a way for Oliver to bring a bunch of people together who grew up here and had a level of maturity about them. We enjoy the opera, the ballet and things on Broadway. We are not restricted to doing things like a group of 20-year-olds living in Wisconsin.”

Anne dear, I will have you know I have gone to more deb balls that you will ever shake a crooked stick at and at each and everyone of them I was forced to politely smile at brats like you because some god fearing publicist said I must. Anne- I agree you are not restricted to what they do in Wisconsin, but let me remind you- if it weren’t for your daddy’s money, you’d be proud of Wisconsin. Another toast to Ollie? Hurry Ollie, the moonshine is dribbling off Annie’s chops.

At the Native Society’s winter event, in February at the Plaza (naturally), 180 of those “mature” individuals appeared like characters out of one of Ellis’s books. Handsome chisel-faced man-boys in tweeds or tails twirled around long-limbed ladies wearing designer skirts and minks. The girls drank champagne; the boys, martinis. The girls appeared to have had their hair tousled by professionals, the boys by the winds over Long Island Sound.

My my Ollie- this sounds like an Edith Waugh novel in the making, all that is missing is my crack smoke pipe. Let me run out and get one now. Brief pause. Mmh- I feel alive now Ollie- take a deep drag, but remember not to inhale- gawd forbid you one day run for Governor or media whore.

But at its heart, the event wasn’t all hijinks and highballs. Alexa Winner, a 22-year-old stylist originally from Chicago who recently joined the organization—which now admits as honorary members non–New Yorkers who “have a native sensibility”—likes that “your last name [doesn’t have] to be Vanderbilt or Waldorf.”

Alexa Winner? Oh yes, we ran a feature on her too. She’s America’s next attention seeker it girl. Nice, tall, uber skinny, recently just out of high school and jam packed in just about every PMC and Wire image issue she can hustle herself into. Now that’s learning the scene quick smart. And she’s very fashionable kids- see – it’s all there in her interview with me. Alexa, are you dribbling moonshine on your bib too? You mustn’t…

But what did our Alexa have to say about life, meaning and media whoredom?

“My parents are successful, but no one cares what they do,” she says. “I’ve made a career and a name for myself on my own.” And despite her self-made success, Winner doesn’t care if she’s labeled a snob. “I do like the notion of exclusivity,” she says. “But the right type of exclusivity—bringing together the most brilliant mathematicians, writers, musicians and artists in the world. Of course, we have a ways to go. But there’s definitely a game plan.”

Alexa a snob?! I’m afraid I have heard much worse and nastier things. But really why should all these older socialites who will go unmentioned in the interim be so jealous of Alexa- Ollie’s supposed better looking half? Can you tell us why Alexa?

And yes Alexa, you and Ollie have quite the ways to go, but never mind, me and the chipmunks will be sure to drop by occasionally with our portable moonshine flasks and help the world spin faster and brighter.

Don’t you wish you were a socialite snot too?

A CANDID LOOK AT THE NEXT GENERATION OF THE ‘NEW SOCIALITES’- THE NEOLITES.

SHOULD A WRITER JUST GIVE UP AND BECOME A SOCIALITE INSTEAD?