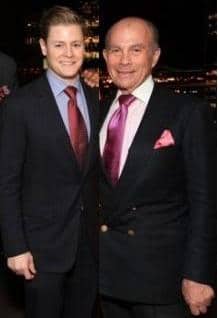 Something isn’t adding up here.

More scandal than celebration, reports courtesy of our friend Peter Davis over at avenueinsider has it that Kipton Cronkite, a social fixture and as it turns out having nothing to do with the eponymous Walter Cronkite (as much as it was wishful thinking on Kipton’s part) has gone off and married real estate tycoon Laurence Kaiser this week.

Despite the eye opening age discrepancy (Mr Cronkite is 39, Mr Kaiser, uhm 69) questions remain about the lingering relationship that Mr Cronkite was (until recently) with a Mr Zev Eisenberg, another budding social fixture that we have seen making laps around the social calendar route.

Avenueinsider: Allegedly, Cronkite and Kaiser had a seven month whirlwind romance – which further perplexes us because we spotted Cronkite and Eisenberg together numerous times in the past few months. They were photographed just last October 28th at the El Museo Young International Circle party together. And even though their body language isn’t exactly lovey-dovey, isn’t it a bit odd to attend numerous over-photographed parties with your ex at your side?

Which has us completely agreeing with Mr Davies. But then again, the couple who were married in Connecticut with just ahem, one witness may be savoring more than they are letting on…

whyfame: Cronkite, who runs KiptonART, met Kaiser in April at a Met Museum party and bonded at a dinner for Britain’s Prince Edward at Jeffrey Bradfield’s East Side townhouse.

“We met in April, we hit it off and became really good friends. We decided to get married last week. People are surprised, only our close friends knew. You want to keep some things private. Being married to somebody who is 30 years older is great in many ways, because of his knowledge, wisdom and emotional stability. I think I am more of an old soul”, Cronkite said.

At this rate we’ll just have to watch and see how this particular investment marriage plays out, but our guess is there’s going to be a lot of running around from one tete a tete to another, the open question being will there be other little chipmunks getting involved and making this ‘interesting’ marriage a tad more salacious interesting…?