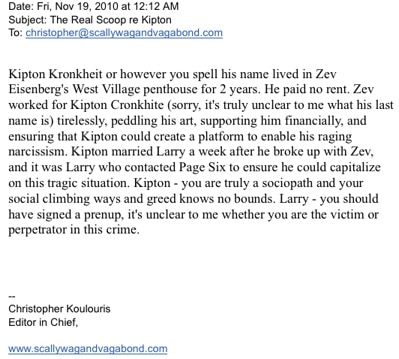 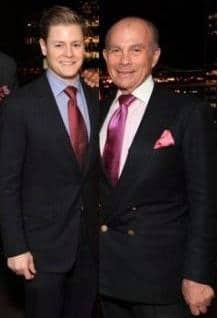 Last week we reported that Mr Kipton Cronkite wed real estate tycoon Laurence Kaiser, 30 years his senior at a wedding reception of just one witness in Connecticut. The sudden marriage seemed to have caused consternation with various journals including NY Post, avenueinsider and NY Mag.

Avenueinsider: Allegedly, Cronkite and Kaiser had a seven month whirlwind romance – which further perplexes us because we spotted Cronkite and Eisenberg together numerous times in the past few months. They were photographed just last October 28th at the El Museo Young International Circle party together. And even though their body language isn’t exactly lovey-dovey, isn’t it a bit odd to attend numerous over-photographed parties with your ex at your side?

But of course it gets better. How much better? Go to the refrigerator and grab yourself a big bowl of raspeberry ice cream and follow us…

NY Mag: Avenue‘s Peter Davis notes that Kipton Cronkite is listed as a sales associate on his new husband Laurence Kaiser’s brokerage website. Meanwhile, “Page Six” says socialites are “outraged” over the match. Sources tell them Cronkite was living with his 22-year-old boyfriend, Zev Eisenberg, of the Berkshire Hathaway Eisenbergs, three weeks before his wedding to Kaiser. In fact, Kipton’s own publicist says that the two of them broke up on October 22 — less than a month before Kipton married his 69-year-old hubby. “Wow! Kipton Kronkhite (note real name) finally found the millionaire he can dance to death on his wedding night,” sniped socialite Emma Snowden-Jones on her Facebook page yesterday. “He must be laughing all the way to the bank.” As for Kaiser, he says: “I am nobody’s fool, Kipton and I are in a real relationship and everyone should stop gossiping.” If that’s what you really want, maybe next time don’t call “Page Six” to announce your secret speedy wedding?

Adding to the consternation is the email that we received over the weekend which may just add some sunshine to the drama called – ” How do I survive as an impoverished fake who’s desperately climbing up the social ladder.” The source of course has been preserved.

To date, I can’t say whether the letter we received is completely true, but cursory back door discussions I have been able to have with various members of society and the inside allude that what you are about to read below is pretty much on target. Which makes us only wonder- “Kipton darling, why didn’t you at least invite us to the wedding…?”