Daniel Gilroy a former coworker of Omar Mateen describes an unhinged man full of hate and prone to anti social behavior. Employer elected to keep him on.

Daniel Gilroy a former coworker of the Orlando Pulse nightclub gunman has told his ex college was ‘unhinged, homophobic, racist, anti Semitic and a misogynist.’

Gilroy a former police officer had worked with Omar Mateen at G4s Security in Port St. Lucie where he tells of Mateen being filled with rage and ‘‘anytime a female or a black person came by, he would use horrible words’.

Describing Mateen as a devout Muslim, Gilroy said his former colleague once told him ‘I would just like to kill all those n******’ after he spoke to a black man and regularly launched into tirades against gay people and members of the Jewish faith.

Told Daniel Gilroy via NBC News: ‘He was scary in a concerning way,’

‘And it wasn’t at times. It was all the time. He had anger management issues. Something would set him off, but the things that would set him off were always women, race or religion. [Those were] his button pushers.’

Gilroy added that Mateen always spoke about members of different races, religions or genders in a ‘derogatory’ manner.

‘He did not like black people at all. That was mentioned once or twice, but more so was women,’ said Gilroy.

‘He did not like women at all. He did like women in a sexual way, but he did not respect them.’

Gilroy worked the community security gate at the PGA Village South in Port St. Lucie for several months in 2014 and 2015, covering the 7am to 3pm shift. Mateen would then take over for him, working from 3pm to 11pm at the resort.

Told the co-workr via Florida Today: ‘Everything he said was toxic and the company wouldn’t do anything,’

‘This guy was unhinged and unstable. He talked of killing people.’

Things between the two men eventually escalated, with Daniel Gilroy alleging that Mateen after a few months of working together had started stalking him. In some instances, Gilroy told of receiving 20 to 30 text messages a day from his co-worker.

Those messages, coupled with Mateen’s behavior and beliefs, ultimately led to Gilroy requesting a transfer after being unable to continue working with the man.

Gilroy claims that prior to that he voiced his issues with Mateen to their employer on several occasions, but that they refused to do anything about the situation. 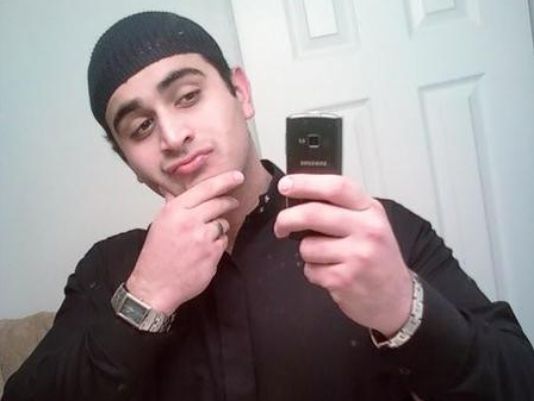 In the aftermath of Sunday’s mass shooting which left just on 50 dead and just as many injured, earning it the largest mass shooting episode in US history, Mateen’s employer, G4S issued a statement telling that Mateen twice passed a background check when he joined the firm in September of 2007 and that management had declined to fire him after the FBI interviewed him about links to Islamic extremism.

They also said that they are now ‘cooperating fully with all law enforcement authorities, including the FBI, as they conduct their investigation.’

Gilroy said he lost contact with Mateen in March of last year and is not shocked that he killed 49 and injured 53 people at the gay club Pulse in Orlando on Sunday morning before being shot dead by police.

‘When I say that he was unstable or unhinged, I mean this is a man who would lose his temper for no reason,‘ Gilroy said to ABC News.

‘He would kick walls, slap desks. I’ve seen him throw the chair across the room one time.’

‘I didn’t want to be around him anymore,’ said Gilroy.

‘I’m not surprised at what he did. I always knew he had something in him like that. And if I had to pick one person that would be capable of that, it would be him.’

For his part, Gilroy who couldn’t wait to get away from his former abusive co-worker tells of regretting having ‘somehow’ not done something that may have averted Sunday’s attack.

‘I kind of feel a little guilty that I didn’t fight harder,‘ he told The New York Times.

‘If I didn’t walk away and I fought, then maybe 50 people would still be alive today.’

A point of view that this author finds completely laughable and at best wishful….and most likely would have earned David Gilroy the ire that Mateen had come to dish out towards the former co-worker.

The company that employed killer Omar Mateen is facing questions over its vetting procedures https://t.co/7UHItd9VPy pic.twitter.com/LK3TJa0nxz

A picture is forming of Omar Mateen. He was a hater first, and then glommed on to ideology to justify it. https://t.co/mCzNim7bNO