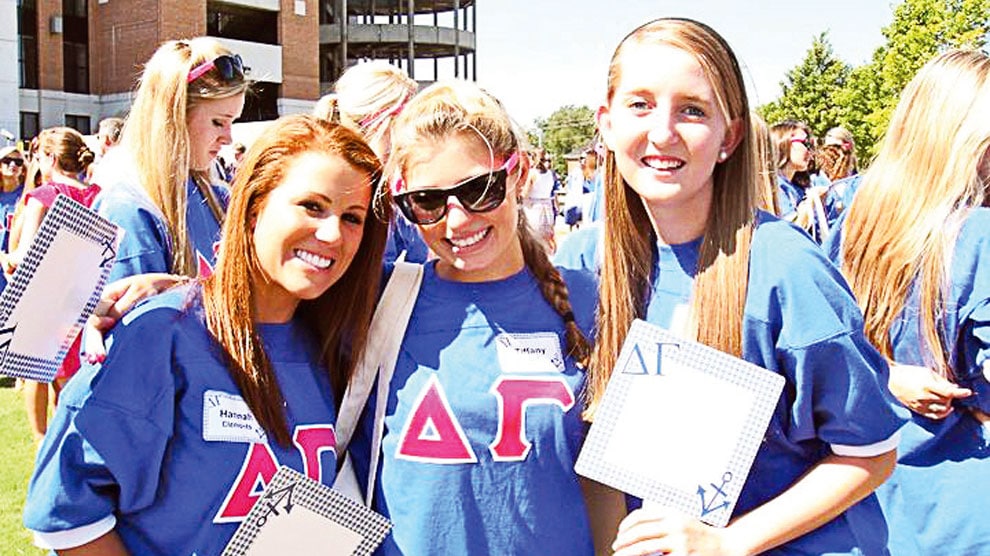 Here’s a ‘fun’ (for a lack of a better adjective and because my eyeballs are still digesting this shit) letter that made its way to gawker (courtesy of a tipster) which goes on to capture what appears to be a disenfranchised (Delta Gamma) sorority sister senior attending the University of Maryland who seems to be peeved with the latest sorority developments in her neck of the woods.

The letter which was only meant to be read amongst the sorority sisters extols one senior sister’s disgust with her chapter ‘matching’ up with a sister (but of course way younger and sloppy) sorority fraternity Sigma Nu. Chief hubris seems to be the Delta Gamma girls preferring their own company as opposed to their newly matched sisters Sigma Nu, and that shit isn’t cut muster anymore.

Reads one passage of the maniacal rant:

For those of you that have your heads stuck under rocks, which apparently is the majority of this chapter, we have been FUCKING UP in terms of night time events and general social interactions with Sigma Nu. I’ve been getting texts on texts about people LITERALLY being so fucking AWKWARD and so fucking BORING.

To be honest I am not sure what to think of this pent up adolescence masking as some misguided rally call to arms except that the idea of a sorority fraternity may not be for everybody cause there’s only so much extra curricular activity can do to balance out some women’s hormonal cords when shit is real messed up inside.

Then again that just might be coming from someone who generally avoids anyone who takes too much pride in plastering their identity along the planks of some social pecking order, real or imagined.

If you just opened this like I told you to, tie yourself down to whatever chair you’re sitting in, because this email is going to be a rough fucking ride.

For those of you that have your heads stuck under rocks, which apparently is the majority of this chapter, we have been FUCKING UP in terms of night time events and general social interactions with Sigma Nu. I’ve been getting texts on texts about people LITERALLY being so fucking AWKWARD and so fucking BORING. If you’re reading this right now and saying to yourself “But oh em gee Julia, I’ve been having so much fun with my sisters this week!”, then punch yourself in the face right now so that I don’t have to fucking find you on campus to do it myself.

I do not give a flying fuck, and Sigma Nu does not give a flying fuck, about how much you fucking love to talk to your sisters. You have 361 days out of the fucking year to talk to sisters, and this week is NOT, I fucking repeat NOT ONE OF THEM. This week is about fostering relationships in the greek community, and that’s not fucking possible if you’re going to stand around and talk to each other and not our matchup. Newsflash you stupid cocks: FRATS DON’T LIKE BORING SORORITIES. Oh wait, DOUBLE FUCKING NEWSFLASH: SIGMA NU IS NOT GOING TO WANT TO HANG OUT WITH US IF WE FUCKING SUCK, which by the way in case you’re an idiot and need it spelled out for you, WE FUCKING SUCK SO FAR. This also applies to you little shits that have talked openly about post gaming at a different frat IN FRONT OF SIGMA NU BROTHERS. Are you people fucking retarded? That’s not a rhetorical question, I LITERALLY want you to email me back telling me if you’re mentally slow so I can make sure you don’t go to anymore night time events. If Sigma Nu openly said “Yeah we’re gonna invite Zeta over”, would you be happy? WOULD YOU? No you wouldn’t, so WHY THE FUCK WOULD YOU DO IT TO THEM?? IN FRONT OF THEM?!! First of all, you SHOULDN’T be post gaming at other frats, I don’t give a FUCK if your boyfriend is in it, if your brother is in it, or if your entire family is in that frat. YOU DON’T GO. YOU. DON’T. GO. And you ESPECIALLY do fucking NOT convince other girls to leave with you.