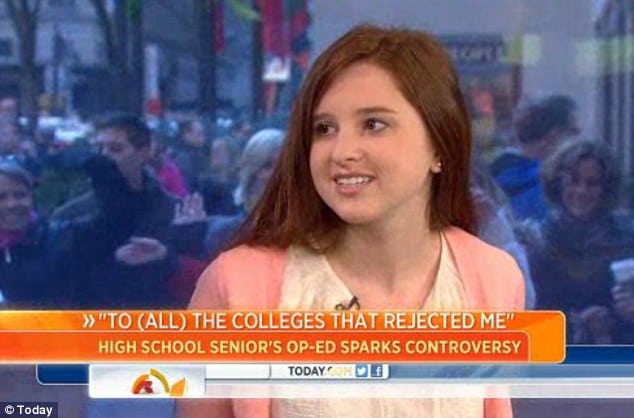 High school senior Suzy Lee Weiss has created a furore after firing off a letter last weekend to the Wall Street Journal  in which she expressed her anger and discontent at being denied a slot at an ivy league school.

Her piece ‘to all the the colleges that rejected me,’ essentially posits the idea that had she been a minority or had her parents forced her to take up more hobbies she would have easily made grade with an ivy league school considering that she has a GPA score of 4.5 an SAT score of 2100 as well as experience as a U.S Senate page. All qualities that Weiss feels under normal circumstances ought to have secured her a birth at an ivy league institution.

Since her letter appeared Weiss’s situation has been dissected by the media at large with many now wondering whether she is a self entitled brat, simply disingenuous or even a racist.

Reflects the sanfrinsco chronicle which aptly regards the tenets of Weiss’ letter:

Weiss opens her piece by saying that she and millions of other high school seniors who didn’t get into the college of their dreams were all “lied to.”

Colleges tell you, “Just be yourself.” That is great advice, as long as yourself has nine extracurriculars, six leadership positions, three varsity sports, killer SAT scores and two moms. Then by all means, be yourself! If you work at a local pizza shop and are the slowest person on the cross-country team, consider taking your business elsewhere.

Weiss goes on to highlight  three things she should have done—but didn’t—that would have gotten her that welcome letter from Yale.

1) Being more “diverse.” She writes, “For starters, had I known two years ago what I know now, I would have gladly worn a headdress to school. Show me to any closet, and I would’ve happily come out of it. ‘Diversity!’ I offer about as much diversity as a saltine cracker. If it were up to me, I would’ve been any of the diversities: Navajo, Pacific Islander, anything. Sen. Elizabeth Warren, I salute you and your 1/32 Cherokee heritage.” (Note: This is the section of the essay that’s leading some people to call Weiss racist.)

2) Starting a fake charity. “I also probably should have started a fake charity,” she writes. “Providing veterinary services for homeless people’s pets. Collecting donations for the underprivileged chimpanzees of the Congo. Raising awareness for Chapped-Lips-in-the-Winter Syndrome. Fun-runs, dance-a-thons, bake sales—as long as you’re using someone else’s misfortunes to try to propel yourself into the Ivy League, you’re golden.”

3) Having a Tiger Mom. “As the youngest of four daughters, I noticed long ago that my parents gave up on parenting me,” she writes. “It has been great in certain ways: Instead of “Be home by 11,” it’s “Don’t wake us up when you come through the door, we’re trying to sleep.” But my parents also left me with a dearth of hobbies that make admissions committees salivate. I’ve never sat down at a piano, never plucked a violin. Karate lasted about a week and the swim team didn’t last past the first lap. Why couldn’t Amy Chua have adopted me as one of her cubs?

Weiss also complains that she attended summer camp instead of going to Africa and holding that suffering child for a photo oop and she never got that “precocious-sounding” internship title such as “Assistant Director of Mail Services.”

Yet the reactions that followed as a result of Weiss’ letter perhaps says more about the vast attitudes towards ivy league education, what many perceive that it takes to make it in today’s socio economic environment and the personal prejudices that a cross current of readers have towards race, entitlement and ultimately those individuals who do in fact manage to get selected by ivy league institutions which in many ways posits the implicit belief system that one almost needs an ivy league education to make real headways in life.

Noted reactions include the following as found on the web:

As cynical as it might be, Suzy Lee Weiss makes brutally accurate assessments of college admissions.

‘Thank you for saying everything on my mind.”

‘Saying what you feel is not always easy or popular! She is going places!
‘

She did not get in because the admissions staffs realized she was a whiney self-righteous egoist. It is disingenuous to say “it was a joke! satire! etc”, we know what she was saying. These things come through on the essay and the background. As another commentator pointed out, with 30K applicants and only 1500 admitted, the Ivy League schools feel no compunction about admitting yet another over-achieving boor into their midsts. They are working to avoid exactly this sort of character, whatever the box-ticking scores presented. And the fact that she felt the need to sound off like that is exactly their vindication – they presciently avoided having that on campus.

“Her gpa and scores aren’t that impressive to be honest, her achievements just weren’t competitive enough. Stop blaming mom and dad and minorities and other classes and accept the fact your best just wasn’t good enough for the places you wanted to go , kid. ” This^^^^ This is clearly an extremely privileged girl whose credentials are not very impressive. For a upper middle class kid, her stats are pretty average and with her attitude of self-absorbed narcissism and entitlement, it’s pretty obvious why she was rejected. There are plenty of kids with less advantages who have MUCH better stats and frankly are much better people.

And tellingly even Weiss reflected the following whilst on NBC’s ‘The Today show;’

‘Everyone my age, whether they wanted to get into Penn state their whole lives or Harvard is agreeing with me that it’s just a rat race nowadays and it’s such a business model as opposed to who’s most qualified should get in,’ she said. ‘It’s a crapshoot and I understand that.’

Yet perhaps the biggest irony in Weiss’ case is that although she may have failed to have landed a slot with an ivy league institution her gumption to do something that most candidates would never have thought to do (the very same qualities that ivy league institutions make a point of looking for) helped her gain entry into Pennsylvania State, Indiana, Michigan and Wisconsin—not Ivy Leagues but still prestigious. That plus receiving job and internship offers.