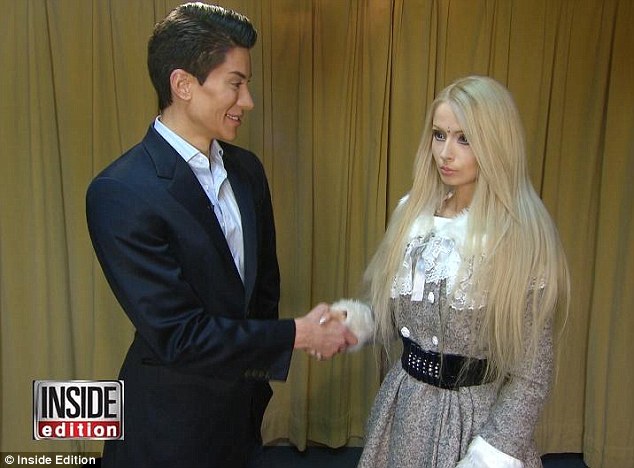 Kids it would perhaps not be an understatement to say that real life Ken and real life Barbie just don’t care too much for each other. Such it seems are the public musings of Justin Jedlica and Valeria Lukyanova‘s our protege to plastic fashion when they finally met face to face this week here in NYC.

Some reckon part of Valeria’s unease with her plastic ideal counterpart, Justin stem from recent comments he made where he described Valeria looking like a drag queen (I know it’s all too shocking isn’t it?).

And what about Valeria? What did she have to say when she finally met her alter ego?

According to The Sun the pair ‘hated the sight of each other’ and photographs show them posing awkwardly side-by-side.’

Real life Ken shot to fame last year after it had been revealed he had spent upwards of $100 000 on body sculpting procedures. Earlier this year he went under the knife again making it his 100th procedure on perfection.

Reflected Justin: ‘I‘ve always been into plastic surgery because it’s an extension of me being creative.’

Among his surgeries are five rhinoplasties, a cranial brow bone shape and augmentations to his cheeks, lips, buttocks and chin.

Explaining why he aspires to look like a plastic doll he told the Inside Edition: ‘Children play with Barbie and Ken all the time so it’s fed to us from a very young age that that is the epitome of what is beautiful or what is handsome.’ 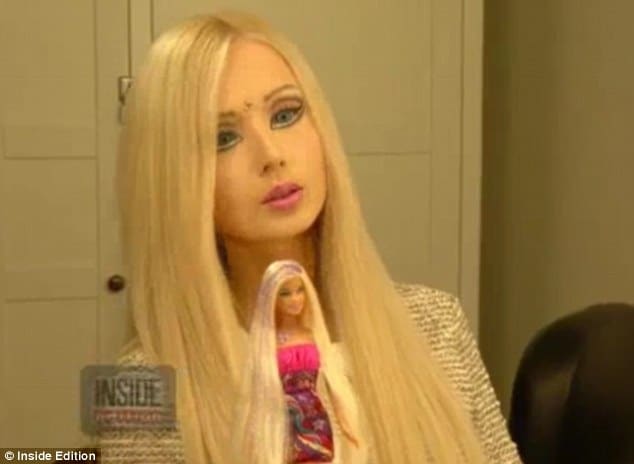 Valeria Lukyanova first hit acclaim after sharing youtube videos of herself where he doll like proportions were the main draw.

Nevertheless our heroine does admit that she has had breast implants, but insists the rest of her body is completely natural and slender due to daily gym workouts. Make-up and skimpy outfits complete her look.

Telling Inside Edition, Valeria offers the following: ‘Barbie is ideal woman’ adding that she had been fascinated with the Mattel character since she was five.’

And how did Valeria react to comments from Justin that she looked like a drag queen?

‘I am not hiding that I’ve had plastic surgery. I had breast implants because I want to be perfect.

‘He would do better not to comment on who is plastic and who is not. I think he is handsome man – but he overdid his lips.’

Isn’t it time you swapped the real you for the idealistic you too? Assuming you don’t mind shocking yourself to oblivion…

Then there was this comment too that caught my attention as well:

Who are the doctors that are performing these surgeries? How can they justify what they are doing? I understand they want the money these two idiots are willing to spend on their looks, but don’t they have ethics and morals? These two need psychological help. It’s not the outside that’s messed up; it’s their insides.