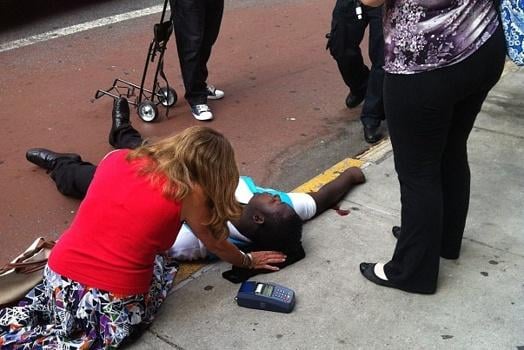 With this morning’s shooting at the Empire State Building which has left 2 dead and up to 8-10 people injured at the hands of a former co worker at one of the stores inside the Empire State building over a year ago commentators have flooded the web with their thoughts, concerns, suggestions and reasons as to how this came to happen and why these type of things keep happening. Once again it shouldn’t surprise anyone a cry for more stringent gun laws has once again ignited. That said, I have taken a sampling of comments across the web that should provide a fervent pool of reflection of the current mindset on the web. See what you think…

Perhaps whats most banal about the shoot out is that initially bystanders thought it was a celebrity sighting meanwhile in the immediate vicinity there were billboards of action heroes brandishing guns. Is it any wonder that the common man is now turning to extreme violence either as a way to assert his independence, his individuality, to settle scores or maybe just to get his own 15 minutes of fame.

eww a year later he shoots his 41 year old boss dead and then involves a sleuth of innocent people going to work. WTFFFFFFFFFFFFFF.. Thank god they killed him.. Anyone who opens fire, runs around with a knife or any weapon in their hand in the middle of NYC deserves to be shot dead. There are way too many innocent people on the city streets, who are busting their butts to go to work.. This was way too close to where I work and im glad I was in my office already.. Freaking crazy arse people.

What do we expect? We have the media glorifying these sick people as though they were some kind of heroes! Stop reporting this madness! People, stop watching! Pray for these victims. Pray for our city, our state, our country, our world. Pray, people, pray….That’s all that will save us. God knows Bloomberg won’t!

Did this perp break the law by bringing the gun into the city?
Why hasn’t the mayor or someone smart put metal detectors at the entrances to the subways & train stations, and then pass an ordinance that travel into or within the city requires the use the subway or train for at least one block? Then these guns could be detected and sent back to New Jersey or Pennsylvania where they belong!

Yeah sure! Why don’t we put medal detectors and naked body scanners at the front door of your house? Let TSA and Homeland security regulate it all, let them fondle your genitals and fondle your kids, as if going through airport security isn’t already degrading and invasion of privacy and American Bill of Rights. Hell why don’t we let the government declare Martial Law and tell us what we can and can’t do. Yeah, words of a true American. Whats the matter with you?
Not quite sure what you are talking about. New York, and in particular NYC has one of the toughest gun laws in the nation with a police force probably second to none….Take your politics out of it, nuts will find a way to do what they do, and no law on the books meet that end….

As a nation, we’re becoming numb to mass shootings. The only answer is to get more guns on the streets so we can make gun violence more fashionable and palatable. Any gun nut can tell you that.

What you sow you reap.

So guns still don’t kill people – Jesus America, wake up to yourselves.

The argument now is we all need guns to protect us from each other.

“If the death penalty is not an effective deterrent, why should an armed populace be a deterrent?”

Au contrair, mon ami, the Death Penalty is an excellent deterrent.
That executed criminal will never kill someone again, now will they.
And to turn your argument back on itself, apparently Strict Gun Control Laws are not a deterrent either.
So why have them?

Not every crime of violence is a terrorist act. A “terrorist” act has some other objective than the act of violence itself, usually poltical in nature.

The gun control laws do not provide adequate protection to law abiding citizens who have the right to carry a concealed weapon anymore than they protect the law abiding citizen from violence perpetrated by someone who has ill intent and the means to a gun or weapon. If someone is hell bent on getting a gun and committing a crime, gun control laws can’t prevent this from happening underground. The actual statistics of legal gun owners committing crimes is about 2% or less I do believe. The average criminal does not have a licence to carry a gun but obtains one anyways. Laws are just laws unless the people follow them in a straight and narrow line which is becoming increasingly thin due to a wide margin in the legal system that changes laws with every president that comes along. All the gun control law can do is legally give ownership of a weapon to that named person ~ it can’t control what they do from there on in or what someone else may do with that weapon.

The op is clear. Subhuman Rockefeller minions recently dressed in grey for the CIA, FBI, with no regard to human life, liberty, and the constitutional right to happiness, have again gunned down innocent humans in the NYC tr-state vicinity. The are anxiously, blood thirstily, awaiting their total control and police state grid. The new world nazi order will never happen.

Let’s face it, this is SOP….raise your hand if you’re numbed to this and don’t care about the victims, because it’s just another day in America?