According to witnesses, Mr Johnson was said to have casually walked up to 41 year old Steven Ercolino, a store manager at the design store and at point blank shot him in the head where he died immediately.

blogs.wsj: “He was an incredible family man, loved his family,” said a woman who identified herself as Mr. Ercolino’s sister-in-law, Andrea.

Mr. Ercolino did not have children, she said, but was the “best uncle to my children.” She described him as generous, fun-loving and compassionate, and said he loved his job selling handbags.

A nearby construction worker heard the commotion as Mr Johnson then continued on the street pavement to now shoot passerbys, shooting as many as up to ten individuals before turning his gun, a .45 magnum at them before being shot dead by the attending police. 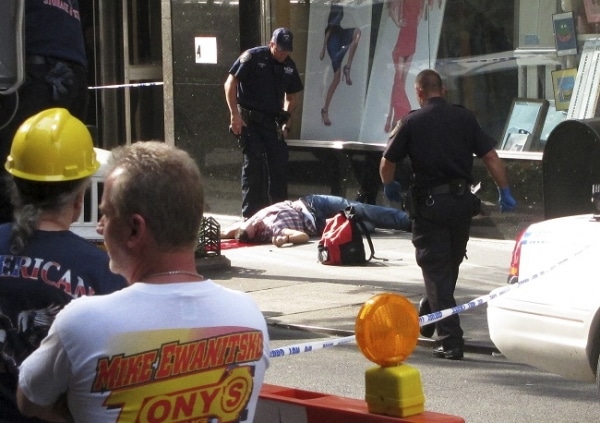 nytimes: Mr. Kelly said that the two officers fired a total of 14 rounds and that he believed some of the shooting victims had been shot by the officers “based on the number of people shot and the capacity of” the shooter’s weapon.

The co-worker, Irene Timan, 35, said they were just steps from the front door to their building on West 33rd Street when she saw Mr. Johnson lurking behind a white van parked at the curb.

“I saw him pull a gun out from his jacket, and I thought to myself, ‘Oh my God, he’s going to shoot him’ — and I wanted to turn and push Steve out of the way,” Ms. Timan said, in a telephone interview from the precinct house where she was being interviewed. “I knew it, I just knew it was going to happen. But it was too late. Steve screamed, Jeff shot him, and I just turned and ran.”

It is believed all those injured will survive. 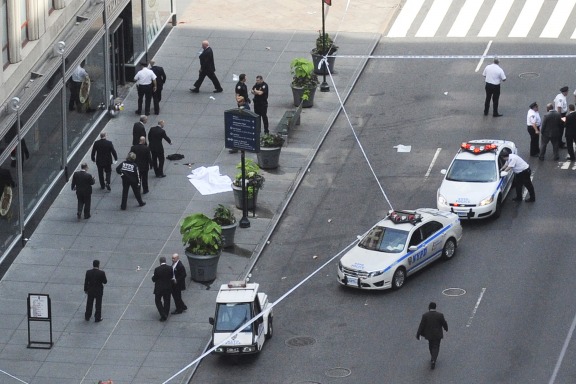