Robert Pattinson accusing Kristin Stewart of having a new affair. Called at 4am begging him to end it.

Kristen Stewart is banned from Robert Pattinson’s NYC Cosmopolis premiere. Is this a joke?

Kristen Stewart is a fine actress. She is also a cheat and a liar.

Kristen Stewart and Robert Pattinson to promote Twilight film together

Kristen Stewart is not pregnant. Source says 100% not true!

Kristen Stewart and Robert Pattinson are back to talking. Studio heads are now pressuring the couple to find resolution.

Kristen Stewart’s parents take her back in whilst agreeing Robert Pattinson has every right not to take her back.

Robert Pattinson wants to talk to Liberty Ross to find out if Kristen Stewart actually had an affair.

Kristen Stewart might be pregnant but she doesn’t who the father is….

Kristen Stewart and Robert Pattinson in custody dispute over their dog.

Commentators have begun wondering out aloud whether the Kristen Stewart photos depicting her canoodling with ‘Snow White and the Huntsman’ director Rupert Sanders are all part of a pre arranged publicity stunt and that the two had been in on it from the very start.

examiner: After browsing through Us Weekly’s complete gallery of the tryst, it appears that either these two – in spite of being aware that they are recognizable and one is a celebrity of ginormous proportions – are either completely inept when it comes to sneaking around, or their blatant lack of effort in evading any paparazzo is due to the entire affair being a publicity stunt.

Although one photo depicts Stewart mildly disguised in a broad pair of shades and…um…her boyfriend’s LA Dodger’s hat (because, you know, THAT won’t give anything away), the other snaps couldn’t be more obvious if the twosome had slapped a bumper sticker on the car they were making out in that exclaimed, “Ask Me About My Infidelity!” with a number to Us Weekly headquarters scrawled at the bottom.

At first thought one was beguiled to wonder if indeed the whole situation is a clever publicity stunt on behalf of Stewart and Sanders (and one imagines the complicit backing of studio heads) to pull off a coup d’etat that is likely to lead to unwavering publicity and exposure for all involved before one also realizes that the two have a lot to lose too if the whole stunt goes wrong. Which in Ms Stewart’s case seems to have been the case, now that her live in boyfriend Robert Pattinson has flown the coup and the public at large have turned their nose at the starlet, with some having gone as far as threatening harm on twitter. 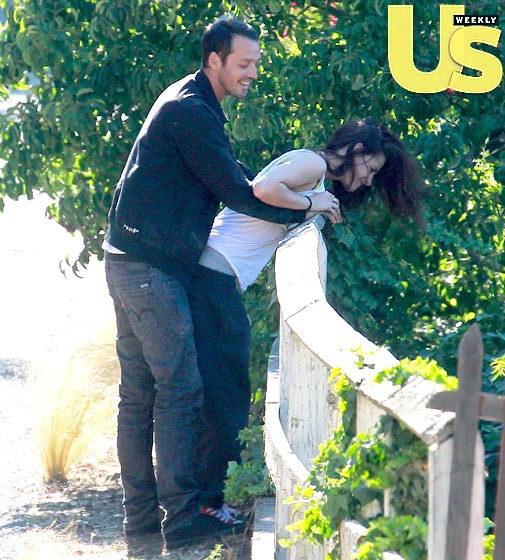 ….in other pictures, when the two step out of the car in a “rundown neighborhood in the west side of town”, the images come off as very posed with Stewart leaning over a guardrail and staring pensively into the…thistles…or whatever was in those trees,’

But even the folks at examiner are quick to note that all the above is mere speculation and one can even wonder the idea of it all being a supposed publicity stunt might be the behind scenes work of publicists trying to resurrect the decaying situation?

Then there’s the idea that maybe these two just wanted to get caught, could such people in their positions really be that stupid to expose themselves to the ever prying eyes of paparazzi on the hunt? After all Kristen Stewart is known for zealously protecting her privacy and has hardly taken the time to announce that she was involved with Patterson (but why should she anyway?)

Then again, if there ever was any intention of leaving their respective spouses why not just have a press release announcing said measures as opposed to concocting elaborate schemes?

I also came across this comment which adds food for thought….

I have been saying this whole time that something just does not add up with this whole story. I am not even a huge fan, but I know enough about them through various interviews to know that she is very private, and she is vary aware she is followed. She has said this for years….so I thought it was extremely odd that she would do anything in public, then I saw the photos, and thought they looked staged, especially when they are looking in the direction of the photographer! The thing that really made me think this was all a PR stunt was when she issued an apology, I mean the woman won’t admit anytihng to anyone, but then she issues an apology declaring her love for ROb. I believe she did more harm for herself by doing that it just makes no sense to me…However, I can not come up with a good reason why they would stage this whole thing, seems a bit extreme to me…but only time will tell….

Pictorial: Kristen Stewart cheating photos. How the paparazzi pulled it off.

Should Kristen Stewart have to apologize about having an affair or not?

Robert Pattinson is urged to give up Kristen Stewart.

Robert Pattinson refuses to do any Twilight promo appearances with Kristen Stewart.

Twilight bosses are panicking now that Kristen Stewart and Robert Pattinson have called it off.

Kristen Stewart and Robert Pattinson only communicating via heated texts.

Did Kristen Stewart have sex with Rupert Sanders?

Kristen Stewart begs Robert Pattinson to have crises talks in NYC this week.

Charlize Theron is furious with Kristen Stewart for having an affair with Rupert Sanders. Or is she?

Was Rupert Sanders fixated with the young ingenue Kristen Stewart because she reminded him of a young Liberty Ross ?

Liberty Ross claims that she had to raise the kids all by herself, husband Rupert Sanders never there in the first place

Robert Pattinson humiliated moves out of house shared with Kristen Stewart after she is caught cheating on him.