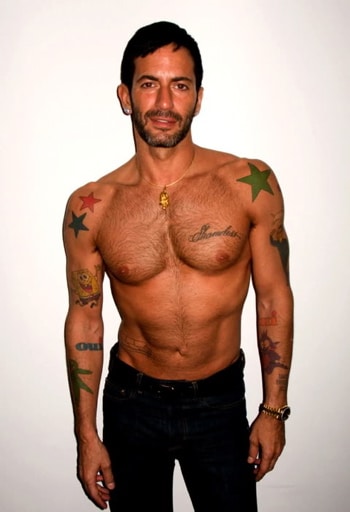 Now that Marc stopped smoking the good shit and decided to get his head together, this fusion of creative energy has kept going from one strength to another as well as one man after the other as well.

As Wikipedia states – At fifteen, Jacobs worked as a stockboy at Charivari, an avant-garde clothing boutique in New York City.[4] From there, Jacobs entered The New School in New York City. During his tenure at Parsons, Jacobs won the Perry Ellis Gold Thimble Award in 1984 and in the same year was also awarded the Chester Weinberg Gold Thimble Award and the Design Student of the Year Award.

In other words kids- this is a man of looks, talent, legacy and a world wide following. How could you not be stumbling over your foot laces to get 16 feet near him. Of course Marc knows better and unless you happen to be trim, buff and half as good looking as him you will have to resign yourself from looking from the football fields three districts over.

And then this from wikipedia, which us has even blushing incredulously:

Jacobs is a prominent fixture in the New York City celebrity scene, having become something of a celebrity himself. The audience for his fashion shows typically includes celebrities like Kim Gordon and Vincent Gallo.[5] Most of his collections make references to the fashions of past decades from the forties to the eighties. Disputing the claim by the designer Oscar de la Renta that Jacobs is a mere copyist, The New York Times critic Guy Trebay has written “unlike the many brand-name designers who promote the illusion that their output results from a single prodigious creativity, Mr. Jacobs makes no pretense that fashion emerges full blown from the head of one solitary genius”.[6] Explaining his clothes, Jacobs has said “what I prefer is that even if someone feels hedonistic, they don’t look it. Curiosity about sex is much more interesting to me than domination. … My clothes are not hot. Never. Never.”[7]

Bitch- shut up- you know you are hot, and even if you are no longer dating some Italian (or was it Brazilian, does it really matter Marc?) lothario we all know you are hot shit and one day when you catch your breath your going to fall madly in love with that thing called idealization staring back at you. Marc- our feet are quivering and at this very minute we have to find spare tissues, but you get the message dear- right? – Bitch is hot! 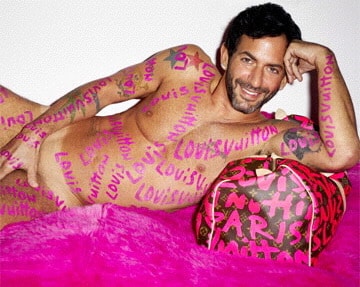