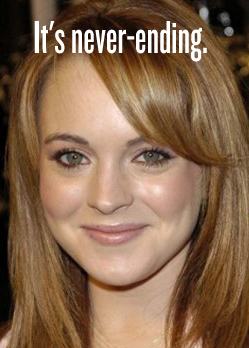 Tweeting that daddy is a loser.

It’s a rare instance when families take their dirty laundry out and air it publicly. Things of course don’t work that way when you are a public figure whose very existence and pay check depends on the public’s continual endorsement and consumption of your troubled life.

With reality TV abundant and with the national appetite in overdrive for salacious nasties on nasty or just photogenic people there has been no end to the rampant titillation called ‘public melt downs.’

For Lilo who has essentially spent her whole life infront of the TV (she used to be a Disney girl- which in of itself is troubling irony, cause we all know Disney is into bubble gum family escapades as opposed to sticky dog shit escapades) it should come as no surprise that she prefers living her life very much in public (even if from time to she complains that it’s a bitch). That said, the blah blah reports about daddy being this and doing that are in overdrive these days and even though there is definitely an audience for this drivel perhaps the greater question is, since when did the chaotic lives of very chaotic people who are obviously beyond redemption (or maybe not and there’s the catch) in such demand?

Are we watching these people because they are too unreal? Or because they remind us of us? Or because we wish we were them, too rich and photogenic? Because we believe in hope and redemption? Or is it simply because we’re as twisted and convoluted as the stage performers,and in essence get what we deserve (or rather what we want)?

Family dramas are sometimes just an escalation of national dramas- and for that you’ll always tune in.

New York Post
LiLo counterattacks on tape
Mama Lohan and Lilo gang up on Papa Lohan.
Lindsay Lohan no longer a lesbian for the time being.