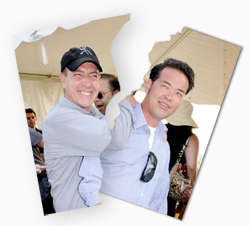 Breathe easy, my fellow media followers, there is a God after all! It was reported that Michael Lohan and Jon Gosselin are no longer BFFs. The unlikely sleaze-duo first made headlines— wait, let me rephrase that— a few blog headlines, when they started hanging out together decked out in all their Ed Hardy glory. Now, however, it seems like they are ending their brief bromance and are now involved in a bitter feud. Of course, Lohan took the low road and had to tell the media about Jon’s “secret, distant” behavior.

He states how Kate Major, the Star magazine reporter who claimed to have had a relationship with Jon, is like a daughter to him and Jon never truly liked her. I don’t know which one is more troubling. The fact that he has two daughters of his own that he should be worrying about or that he thinks of a random Star magazine reporter as his “daughter.” He also says how “Jon said that he wanted to be with Kate and even went so far as to tell her to quit her job (against my advice) and he would hire her,” and ” After getting to know Jon and hearing how he said TLC was ‘screwing’ him, I then introduced him to Mike Heller, and Mike introduced us to his dad, Mark [Heller]. The three of us cut deals to represent Jon, and representation documents circulated. But as time went on, I was cut out. Albeit, Jon began to become secretive and distant, regardless of the deals I brought to the table. A book contract was even breached without any consideration. All because other people wanted a bigger piece of the pie. As of late, contracts have been breached, legal ethics violations have ensued and Jon has become a different person than I thought he was.”

Since when did being a father of a former child actress make him such a heavy hitter in Hollywood? And is it his sudden turn to Christianity that makes him feel the need to help out those in need, then spit them out into the media when they don’t obey his commands? Whatever it is, it’s like watching a never ending train wreck. Wait, wait, even more importantly, why is Jon Gosselin getting deals? Why is he still in the media eye?! In any event, let’s be happy with the fact that these two absentee fathers are now feuding and the apocalypse is still yet to come.

PerezHilton.com
The Bromance Is Over!

Papa Lohan begs Maury Povich to help him save Lilo.

The Ins and Outs of Media Whoredom.

Gosselins GF: “He’s like Jekyll and Hyde. But I still love him.”